Miley Cyrus let the tears – and the mascara – flow over the weekend during a rendition of “Wrecking Ball” in Las Vegas, saying she knows she’s making trouble for herself, but that she’s just following her heart.

The 20-year-old terrible twerker turned on the waterworks Saturday iHeartRadio music festival, where fans chanted her name before her brief appearance, the Associated Press reported Sunday. 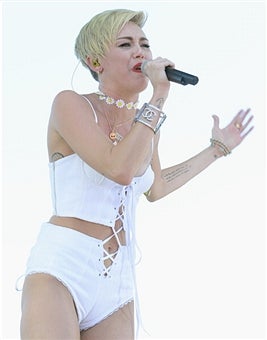 Also read: Why Miley Cyrus’ VMAs Twerknado Wasn’t So Bad After All (Video)

According to the AP, Cyrus said she knows “things I’m doing that’s getting me into trouble and it’s just me doing what my heart and soul is telling me what to do (sic).”

Wearing a revealing white corset and high-waisted shorts (above left) and appearing with people dressed as flowers and a dwarf dancer for some reason, Cyrus performed four songs, including her emotional rendition of “Wrecking Ball,” which left her face streaked with mascara as she left the stage.

Cyrus announced just days ago she was no longer engaged to “Expendables 2” actor Liam Hemsworth.

She added that everything she’s done – including that incredibly bizarre VMAs performance, we presume – is “inspired by the music.” That’s confusing, because we were sure she was being inspired by Bloom County character Bill the Cat (below).