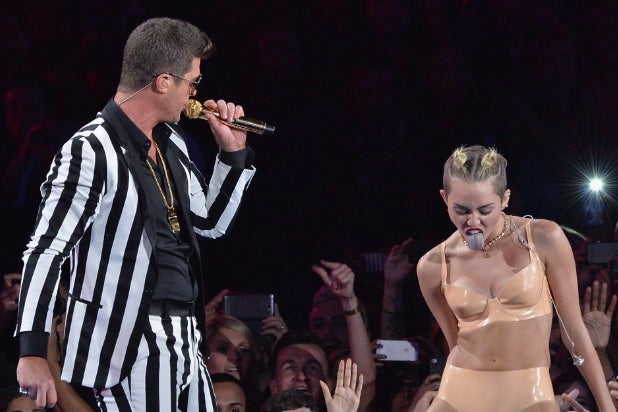 Miley Cyrus is not sweating the fall-out from her raunchy performance at the MTV Video Music Awards last week.

In fact, the former “Hannah Montana” star said going into the performance of “Blurred Lines/We Can’t Stop” both she and Robin Thicke knew they had cooked up something pretty ground-breaking for the folks at home. It’s a musical moment that found Cyrus gyrating against Thicke’s crotch and twerking with some dancing bears while wearing a skin-colored bathing suit.

“Anyone that performs that’s what you’re looking for, you’re wanting to make history,” Cyrus said. “Me and Robin, the whole time said, ‘You know we’re about to make history right now.'”

Cyrus said she was surprised that her sexual provocations were still generating headlines and criticism from the likes of the Parents Television Council days after the broadcast.

“They’re over-thinking it,” Cyrus said. “You’re thinking about it more than I thought about it when I did it. Like, I didn’t even think about it ’cause that’s just me.”