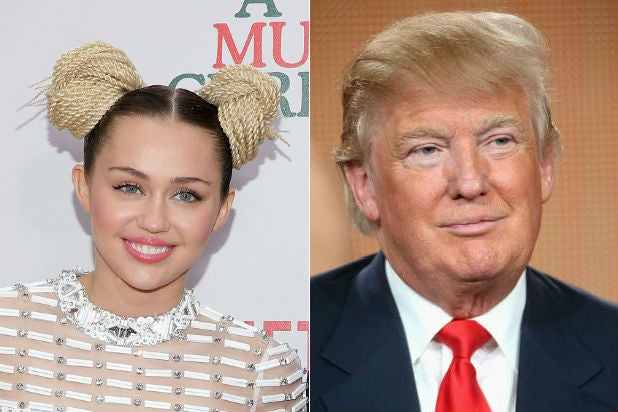 Miley Cyrus is joining the list of people claiming they will leave the country if Donald Trump becomes President.

The singer posted several photos on Instagram following Trump’s victories on Super Tuesday. In one post she said she will leave the country if he becomes President.

“YOU [Donald Trump] ARE NOT GOD NO MATTER HOW MUCH YOU THINK YOU ARE!!!” Cyrus wrote. “[If] he doesn’t think he is ‘God’ he thinks he is the fucking chosen one or some shit! We’re all just fucking jam between his rich ass toes! Honestly fuck this shit I am moving if this is my president! I don’t say things I don’t mean!”

In another post, Cyrus posted a photograph of two bloody hands with the caption, “I’m gonna puke ….. This what our future looks like with [Donald Trump].”

Earlier on Wednesday, it was reported that searches for the phrase “how to move to Canada” spiked 1500 percent after Trump’s victories in primary states.

Speaking to supporters at his Mar-a-Lago estate in Florida, Trump congratulated Ted Cruz for the senator’s win in Texas before taking a swipe at Hillary Clinton’s record, saying she has been in politics a long time and “isn’t going to straighten it out” if elected president. Trump also took aim at GOP rival Marco Rubio, saying the “little senator” had a “tough night.”

Yes . That is a tear rolling down my cheek dripping off the end of my nose….. This makes me so unbelievable scared and sad…. Not only for our country but for animals that I love more than anything in this world…. My heart is broken into a 100000 pieces ….. I think I may vomit …. That picture on the right is so disturbing…. YOU are not destiny! It is not your job to decide when a living things life is over …. & YOU DT ARE NOT GOD NO MATTER HOW MUCH YOU THINK YOU ARE!!! (& if he doesn't think he is "God" he thinks he is the fucking chosen one or some shit! We're all just fucking jam between his rich ass toes! Honestly fuck this shit I am moving if this is my president! I don't say things I don't mean! )

I'm gonna puke ….. This what our future looks like with DT