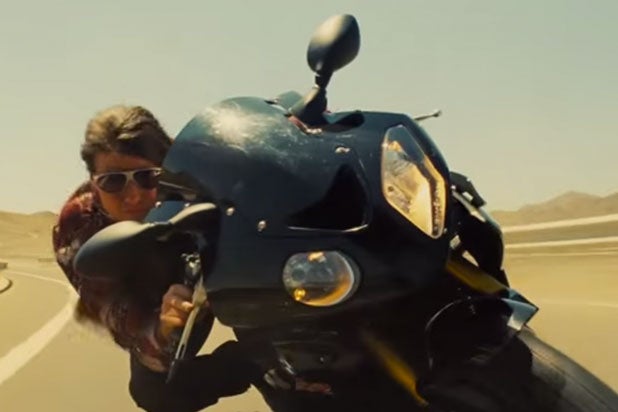 Tom Cruise’s “Mission: Impossible — Rogue Nation” fought its way up to a $4 million Thursday night opening, possibly paving the way towards a $40 million dollar opening weekend that both Paramount Pictures and tracking numbers have suggested for the $150 million production.

If the action movie hits its mark, that will make it the third-lowest No. 1 opening of summer, ahead of only “Spy” and “Tomorrowland.”

The fifth installment of the blockbuster franchise opened at 2764 locations beginning at 8 p.m. The film played on 366 domestic IMAX screens last night, raking in a solid $950,000. Over the weekend, 369 IMAX screens will play the Tom Cruise action-packed movie.

Meanwhile, Warner Bros.’ Ed Helms comedy “Vacation” made an additional 2.5 million on Thursday night, sending it up to a $6.2 million total since opening Wednesday.

The first box office figure for “Rogue Nation” is comparable to that of “Mad Max,” which earned $3.7 million in evening shows, and “Dawn of the Planet of the Apes,” which earned $4.1 million last year.

The film will open in 40 international countries this weekend, including the UK, Australia, Mexico and Korea.

In this summer’s “Mission: Impossible,” Ethan Hunt (Cruise) and his team take on their most difficult mission yet, taking on an international rogue organization just as skilled as they are, committed to destroying the IMF.

2011’s “Mission Impossible: Ghost Protocol” was a hit for Paramount, taking in $209 million domestically and $485 million from abroad. In all, the franchise has generated more than $2 billion in global grosses for the studio since 1996.

Helms, who co-stars with Christina Applegate as his wife, plays a grown-up Rusty Griswold — the son of Chevy Chase’s Clark Griswold in 1983 comedy classic “National Lampoon’s Vacation.” Leslie Mann and Chris Hemsworth co-star, while Chase and Beverly D’Angelo make cameo appearances in a nod to the original.

The production budget for the sequel directed by “Horrible Bosses” writers John Francis Daley and Jonathan M. Goldstein is roughly $30 million, so this one has profitability in its headlights.