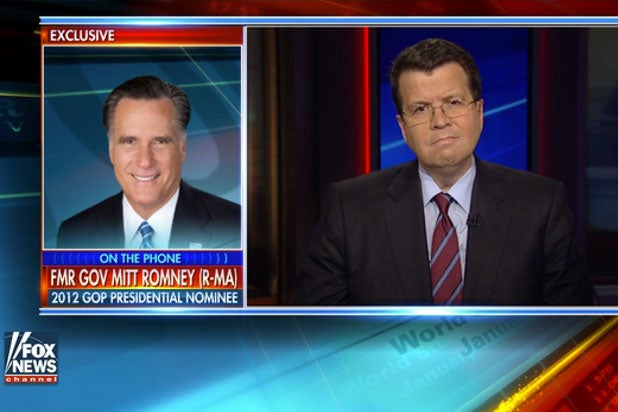 Mitt Romney called in to “Your World With Neil Cavuto” on Fox News Wednesday demanding to see tax returns for the top three GOP candidates, saying specifically that he expects a “bombshell” from frontrunner Donald Trump’s most recent filings.

The 2012 Republican nominee for president briefly gave his thoughts on what additional policy positions he’d like to see from candidates Trump, Marco Rubio and Ted Cruz before hitting the three hard on tax disclosures he says are still outstanding.

“I’d like to see where they filed their taxes in the last several years. I’m not talking about their taxes this year, I’m talking about the taxes that have already been filed with the IRS, and Donald Trump and Marco Rubio and Ted Cruz have not shown us their back taxes.”

Noting that this was an issue during his own run in the last presidential election, Romney said, “I think we have good reason to believe that there’s a bombshell in Donald Trump’s taxes.”

When pressed by Cavuto to clarify, Romney said, “Either he’s not anywhere near as wealthy as he says he is, or he hasn’t been paying the kind of taxes we would expect him to pay, or perhaps he hasn’t been giving money to the vets or to the disabled like he’s been telling us he’s been doing.

“The reason that I think there’s a bombshell in there,” the former Massachusetts governor continued, “is because every time he’s asked about his taxes, he dodges and delays and says, ‘Well, we’re working on it.’ Hey, we’re not talking about the taxes that are coming due this year — of course they’re working on those; they won’t be ready for months — we’re talking about taxes already filed. Back taxes.”

Romney’s tax returns were a significant issue during his campaign, something he at the time said should not be a campaign issue.

“They were all over me for my taxes — became a big issue, but I put my taxes out in January of 2012 and that gave people a chance to digest it and decide whether I was going to be the nominee or not. And if in fact Donald Trump’s taxes or Marco Rubio’s or Ted Cruz’s have some real problems in there, let’s get them out and see them.”

After refusing for months to release information about his personal tax filings during the 2012 campaign, Romney eventually disclosed his 2011 return and a summary of his tax rates dating back to 1990 about six weeks before the election.

“Look, people have a right to know if there’s a problem in those taxes before they decide who our nominee’s going to be,” Romney said. “The fact that [Trump] is so aggressive in avoiding any discussion of his taxes and is not willing to put them out so far suggests there’s something in there he doesn’t want us to see.”