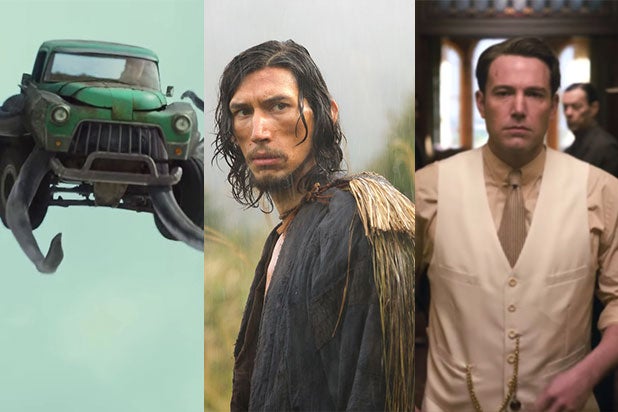 Paramount already took a major writedown last September for its action movie, so many had anticipated the loss. But “Live by Night” and “Silence,” both high-profile movies with budgets of $65 million and $40 million, respectively, also underwhelmed at the box office.

“It’s a jungle out there right now and unless you are ‘Hidden Figures’ or ‘Rogue One,’ or a similarly successful movie,” Paul Dergarabedian, senior analyst at comScore, told TheWrap. “It is going to very tough to become the next big thing at the multiplex.”

Indeed, Fox’s fact-based period drama “Hidden Figures” had a successful second weekend at the box office, earning $20.5 million over the three days and is expected to make $25 million-plus over the four-day holiday weekend.

Lionsgate’s “La La Land” had an incredibly strong weekend following its record-breaking win of sevent awards at last weekend’s Golden Globes. With its word-of-mouth and awards buzz, it makes sense that other films that didn’t quite offer the same dreamy escapism could keep up.

“Live by Night” might have trouble passing the $6 million mark this weekend after earning an estimated $5.4 million over the three days. Given a budget of $65 million, that’s not great.

Poor reviews (the gangster movie has a Rotten Tomatoes score of 32 percent and a B CinemaScore) surely hurt the film, which came in with high expectations since it is Affleck’s first directing effort since his 2012 Oscar-winning hit “Argo.”

According to Dergarabedian, there were high expectations for Affleck, who directed, produced and starred in the movie.

“The baked-in expectations that come along with the name Affleck or Scorsese attached to a project or a massive budget number creates in and of itself a level of scrutiny at a much higher level had the budget been $25 million rather than $125 million and/or the filmmakers were of a much lower profile,” he told TheWrap.

Scorsese’s “Silence” didn’t fair too well this weekend either. Expanding nationwide this weekend to 747 theaters, the film’s budget was in the mid-$40 million range, but the movie starring Andrew Garfield and Adam Driver isn’t expected to earn more than $2.5 million. That would bring its cumulative to $3.4 million.

“Silence” may have been hurt by its nearly three-hour running time, its setting in 16th-century Japan and the fact that it has been mostly passed over in major awards despite its pedigree.

“‘Silence’ given its subject matter and more impactfully a marketplace literally jammed with ‘awards season’ fare has simply entered a theatrical environment that is almost too crowded for its own good,” Dergarabedian said.

“Unless you have the momentum of a ‘La La Land,’ a ‘Manchester By The Sea’ or ‘Fences,’ it’s nearly impossible to rise above all of the clutter and get noticed by audiences who are being pulled in too many directions right now,” he added.

Paramount didn’t have a great MLK box office weekend, with “Monster Trucks” also bombing — as had long been expected for the $125 million production.

Last September, Viacom reported a $115-million write-down for a movie believed to be “Monster Trucks.” And the movie is projected to earn a disappointing $14.1 million over the four-day holiday weekend ($10.5 million over the three days).

“‘Monster Trucks’ is more a victim of a tough profit ratio since the four-day projection of  $14.1 million is actually higher than what was expected heading into the weekend,” said Dergarabedian. “The film has been in the crosshairs and under much scrutiny with its reported $100 million-plus price tag being balanced against the prospects of a very tough road to eventual profitability.”

Weather in Boston, where the movie is set, may have contributed to the underperformance, along with the heavy subject matter. According to analysts, movies like “Rogue One” and “La Land” offered a sort of escapism from real-life events.

Moreover, the great word of mouth “Hidden Figures” has received and the Martin Luther King Jr. holiday weekend may have caused the movie starring Taraji P. Henson, Janelle Monae and Octavia Spencer to be a much bigger draw than expected — making it hard for other true-life movies to compete.