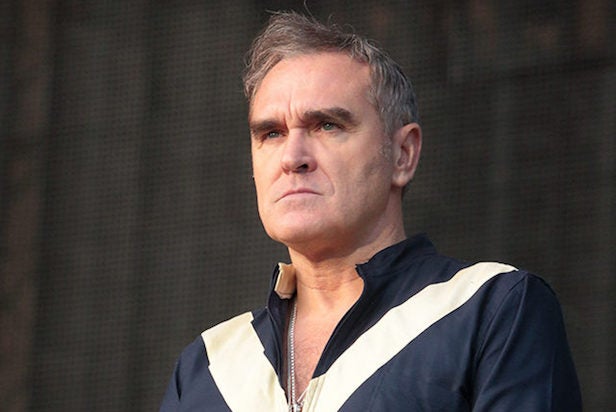 Hang the blessed Morrissey? OK, we may be well past that sentiment with the former The Smiths frontman at this point, as fans appear to be done apologizing for the singer after he gave an interview in which he claimed, among other things, that Adolf Hitler “was left wing.”

“As far as racism goes, the modern Loony Left seem to forget that Hitler was Left wing,” the singer said in an interview with John Riggers published on his website Morrissey Central Monday. “But of course we are all called racist now, and the word is actually meaningless.”

“It’s just a way of changing the subject. When someone calls you racist, what they are saying is ‘hmm, you actually have a point, and I don’t know how to answer it, so perhaps if I distract you by calling you a bigot we’ll both forget how enlightened your comment was’.”

When Riggers says that “London has become a murder capital recently,” Morrissey responded that the city is “debased.”

Though this is far from the first controversial thing Morrissey has said in recent years, those comments were enough to give fans everything they needed to lay into the iconic musician.

“Shout out to Morrissey’s interviewer, you allowed him to hang himself more effectively than in an all-out hatchet job,” one tweeted.

“i regret to inform you that Morrissey’s brain has turned to oatmeal,” another wrote.

My dad always warned me not to get a Morrissey tattoo when I was younger which I was adamant I was getting, incase he turned out to be a nonce or something, thank you dad, thank you forever ????

Morrissey saying he hates reggae in 1983 really was a clue wasn't it.

Shout out to Morrissey's interviewer, you allowed him to hang himself more effectively than in an all-out hatchet job

i regret to inform you that Morrissey’s brain has turned to oatmeal https://t.co/xaeZiSXrDe

NEWS! Son refuses to believe Dad’s assertion that there was a time when Morrissey wasn’t a twat https://t.co/uj5bRyAlDf pic.twitter.com/Lv0OAc4KkD

Laughing at all the infantile freaks crying just because Morrissey has the gall to be unapologetically right-wing in the modern age. Morrissey helped them through the hardest times of their life but couldn't quite prepare them for a world with divergent viewpoints. #Morrissey

Beyond Prince: '80s Pop Stars Then and Now (Photos)

On the first anniversary of Prince’s death but TheWrap looks at peers such as Morrissey, Cyndi Lauper and Duran Duran who are still going strong