Last night I watched "The Bachelor" on ABC. The fact that people are brave enough to go on television and search for love is fascinating to me. By fascinating, of course, I mean it’s a train wreck, and I can’t get enough.

For every 15 people on this show, maybe three are actually looking for love rather than fame. The search for those three people is worth all the time we invest watching. The end of the season is fast approaching, and I can’t wait. 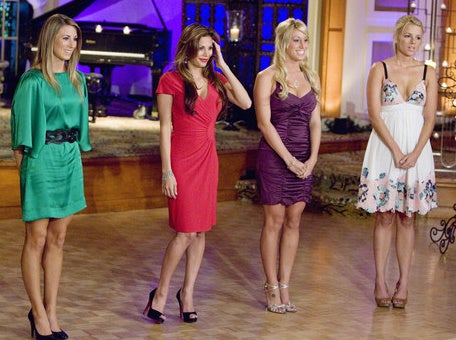 We are down to the last four women (from left): Tenley, the divorced Disney princess. Gia, the gorgeous model. Vienna, the eloping, money-stealing, posing naked, can’t drive, has a weird relationship with her dad, soldier-disrespecting, Florida swamp girl. (My favorite.) And Ali, the mean girl.

We start off in NYC with Gia. She is really pretty. So good-looking that you almost forget how annoying her voice and laugh are. Almost. She talks about her insecurities, which makes her more beautiful. One would imagine a girl who looks like this must be so secure. In the end, she is just a girl, and quite endearing.

She takes Jake on a boat ride around Manhattan. They seem awkward to me. I think he is into how she looks, but there is not a lot of substance. She might be a little too trophy and not enough wife. There would not be a lot of deep conversations, but there may be a table flip or two. I just don’t feel it, and I think Gia has another broken heart in her future.

Of all the parents we meet, Gia’s mom is the one I like the most. I love how much she loves her kids. She would be a great mother-in-law. Plus, you’d get summers on the Jersey Shore, and we all know that is fabulous.

If he picks her, it will be like Harrison Ford and Melanie Griffith in "Working Girl." It could work — in the same way that blueberries go in a bagel, or mayo on a corned beef sandwich. It’s weird, but some people like it.

We are now in Massachusetts with Ali. I’m not a fan of this girl, which is a change. She was my top pick early on. By not a fan, of course, I mean I want this chick to be gone. Jake looks at her differently than he looks at the others. I think of all the girls, he loves her the most. That’s too bad, because she is evil.

Ali takes Jake for a tour of her dead grandmother’s house. It sounds disturbing, but was actually quite romantic and sweet. They then go to her mom’s house for dinner. No real connection between Jake and Ali’s family.

When he is talking to her mom, he does not ask for her daughter’s hand in marriage, but talks about how he would want to know how she felt. She gives him her blessing. Then Ali tells him that if he asked her to marry him right then, she would say yes. She does not care about Jake. She is all about being on television. I want her gone.

I’m so over this chick. She is going to do a dance for Jake and mentions three times that her ex-husband never cared about her dancing. How many times do you think they all refer to her ex? A total of 16 times. Obviously they don’t like talking about him.

When Jake is talking about the dance, he calls it a “lyrical routine.” Really? Clearly Jake watches "So You Think You Can Dance." Love it. Now we see Tenley’s dad and Jake having a private chat.

The dad admits that they’ve watched "The Bachelor" in the past. Cute. Then Jake does it. He asks Tenley’s dad for her hand in marriage. The dad gives it.This is the only parent from whom he asks permission to marry his daughter. Interesting.

We are now in Florida with Vienna. They have the easiest vibe, but they make out the least. They go on a boat ride through the swamp and have a good talk. They then head home for dinner. Vienna has an almost uncomfortable closeness with her dad. She is having a private chat with her dad, and tells him she loves Jake.

Vienna’s dad takes Jake out to the shed for a talk. He lets Jake know she is to be treated like a princess. I swear they were playing the music from "Deliverance" in the background. Maybe it was my imagination. Jake does not ask for his blessing in terms of asking for her hand in marriage.

They are making out in a bedroom when the dad barges in. He tells them to keep 12 inches between them. Vienna tells her dad she needs a few more minutes, and he tells her he will be right outside and leaves the door ajar.

Come on now, Daddy. She’s been married, and she posed naked for a calendar. She can be alone in a bedroom, for a minute, with the cameras rolling.

We are back in Los Angeles and the rose ceremony is coming up. There is a knock at Jake’s door and it’s Ali, the evil witch. She is crying and whining, and says that if she stays she will lose her job. Sound familiar, Ed? I’m not buying this for one minute. I call bull$#@&.

We now watch 15 of the most passive-aggressive minutes in television history. She is trying to get him to tell her she will be the one, and he won’t do it. If it were me going to ask a man to beg me to stay, I would probably brush my hair and wear something cute. That’s just me.

She tells him she can’t decide what to do, and will let him know at the rose ceremony. She leaves in tears after lingering in the doorway, in case he starts pleading for her to not go. Instead, he tells her that whatever she decides is OK with him.

She leaves and collapses in the hallway crying. Really? Did she forget her room key? It is so dramatic and fake. This chick is a loon and she is playing games. Your 15 minutes are up, Ali. Buh-bye.

Chris Harrison is talking to Jake about Ali needing to leave. Jake admits that he is falling in love with more than one girl, and he does not want the pressure of telling her to stay when he is not sure she is the one he wants to marry. The girls all come in, and Ali tells Chris she wants to talk to him. Cue the soap opera music!

Now Ali is sitting with Jake. She is wearing a dress that does not fit, and shoes she cannot walk in. She looks miserable and her whining voice is annoying. She is crying, wiping snot all over her hands, and then putting her hands all over Jake. She is once again playing games to try to get Jake to beg her to stay.

Jake tells her he does not want her to go. She talks a lot about the other three girls, but never talks about her job. Never says it’s her dream job, that she is up for a promotion, or that she even loves the job. She does say that she loves Jake, though.

She wants a guarantee. She is imploding as we watch. Derailing herself, and it’s fantastic. My dreams have come true. Ding, dong, the witch is dead! Ali has decided to leave and go back to her job. He tells her she was not on the line tonight, but she sticks with her plan and decides to go. Blah, blah, blah. Get out!

She is crying as she gets in the limo, and says she thinks maybe she made a mistake. She cannot believe what she has done. Jake is fake-crying and trying really hard to force a tear that simply won’t come. He finally gives up and wipes his eyes as if he were really crying. It is so entertaining I can hardly stand it.

For the first time in "Bachelor" history, there is no rose ceremony! Gia, Tenley and Vienna are the final three. When Chris tells them Ali has left, they all smile. No looks of shock or sadness. Just a smile that translates into big sighs of relief.

Next week we go to St. Lucia for three dates and three fantasy suite opportunities. As we are getting a sneak peek, they show Jake in his room answering the phone, and it’s Ali. Sheeeeee’s baaaaaaack!

If he lets her come back, I’m going to be pissed. You get one shot, sister, and you blew it. Get lost.

We have the St. Lucia trip, the Women Tell All Special, and then the finale. Hard to believe there are only three weeks left.

If Ali is still in the running, I’m going to boycott. Do you hear me, Mike Fleiss? I’m not kidding. I will boycott your show and not watch it. I’m serious. It’s Ali or me.

Important to note that by not watching it, of course, I mean that I will not stop watching it, but rather will watch it with a bad attitude. I’m all business, Mike.

This show never gets old, and I cannot wait to see what happens next. I am delighted to say that I have been invited to the taping of the Women Tell All Special next week. I predict the final two will be Vienna and Tenley.

I watch this show season after season hoping for another Trista and Ryan. March 8 will be the wedding of Jason and Molly. They took an unconventional route, but they found their fairy tale.

Maybe Jake will be the next one to find love. All it will take from this point on is not getting sucked into the darkness by Ali, great editing, and the ability to keep the faith.