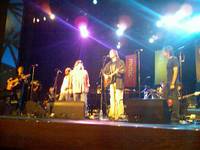 Yes, that’s Jackson Browne at the mike, and a grandfatherly David Crosby looking on, at one of the most fun times I’ve had recently, a fund-raising concert for arts programs at Santa Monica high school on Saturday night. This was a fantastic gathering of music-loving friends of the musicians and local parents and fans (director Cameron Crowe was in the audience, so was director Paul Haggis), with a bunch of songs joined by students from the high school’s music program. Jackson’s rocking version of "The Pretender" included all the strings, and the horns, the slide and the beautiful baby grand piano, along with his still sweet vocals. Crosby was backed on classic CSNY songs like "Woodstock," "Carry On" and "Long Time Gone" by the extremely eager (but able) local band, Venice, who started the concert with their own set. They managed to nail the tricky CSNY harmonies. Near midnight, drummers from the school’s marching band came down the aisles to pound out the opening beats of "Four Dead in Ohio." In all, the room rocked, the students beamed, Jackson Browne looked almost the same after all these years. I hate to say it, but this was a Cleveland girl’s dream come true.