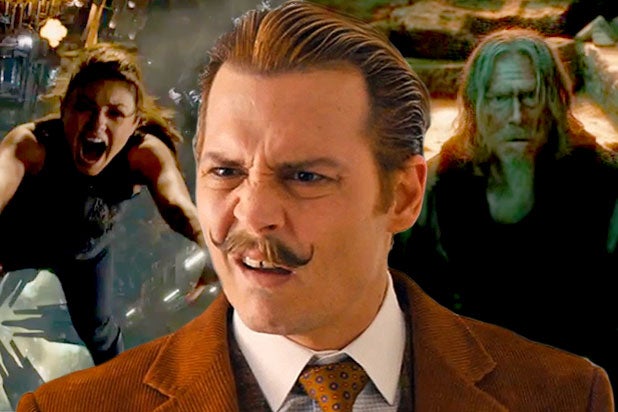 Hollywood has seen more than its share of movies bomb this year despite a red-hot box office that’s running more than 10 percent ahead of 2014.

With Andy and Lana Wachowski’s “Jupiter Ascending” and Legendary Pictures’ “Seventh Son” tanking this weekend, six or seven of the 17 movies released widely so far this year won’t come close to making back the money that it cost to produce and market them.

That’s an exceptionally high average — seven would be 41 percent — given the gains made so far in 2015.

“American Sniper” just shattered nearly ever January record and “The SpongeBob Movie: Sponge Out of Water” narrowly missed the February opening mark with its stunning $56 million debut over the weekend. “Fifty Shades of Grey” looks huge and “Kingsman: The Secret Service” is tracking well. Both open Friday.

See photos: 41 A-List Actors Who Bombed as Hard as Johnny Depp in ‘Mortdecai’

On Monday morning, B. Riley analyst Eric Wold revised his first quarter projection upward and now anticipates that the 2015 box office will rise between seven and eight percent and could hit a record-breaking $11.2 billion.

So what’s with all the bombs?

“This is shaping up as a feast or famine year,” BoxOffice.com senior analyst Phil Contrino told TheWrap. “With these movies, and a lot of those that are coming, hitting so big, it’s inevitable that some aren’t going to perform. We’re getting either massive hits or disappointments, and not much in between.”

It’s the same dynamic we saw in the summer of 2013, Contrino said. A surfeit of superheroes and sequels produced the highest-grossing summer ever — and more big-budget bombs than Hollywood had ever seen in a season.

“The market can expand if the movies are strong and people want to see them, but movies that people are on the fence or not enthused about are going to suffer,” he said. The combination of breakout hits like “Sniper” and some weaker films released in what has traditionally been a soft period for the studios makes the trend more pronounced.

“On Friday or Thursday people see a movie, they tell their friends about it on Facebook or Twitter or Instagram, and it becomes a situation where you have to see it before Monday if you want to be part of the conversation on Monday,” he said. “It’s just like it has been for years, but social media makes it all happen faster now.

Breakout movies don’t necessarily suck the air out of the market, he cautioned.

“Big hits can go the opposite way and energize the movies around them,” Contrino said. “I’m confident that ‘Furious 7’ and ‘Avengers’ will boost the whole box office and people will get really pumped for summer.”

Universal Pictures revs up the next installment of its hot car saga on Apr. 3, and Disney and Marvel’s “Age of Ultron” lands on May 1.

In the meantime, if the hits keep coming at this pace the bombs will too. So it’s worth remembering that major misses come with the movie biz territory. No one directs, green lights or stars in a film because they think it will flop. And it might make sense to take a cue from Hollywood’s distribution executives, who rarely gloat when a rival studio’s film fails. That’s in part because they know they’ll be the one with the bomb soon enough.