It’s not every day that a guy provokes the rage of the President of the United States.

Now the President has launched a ferocious attack against me and my film "2016: Obama’s America."  Posting his comments on barackobama.com, Obama calls the film “an insidious attempt to dishonestly smear” him by engaging in “subterranean conspiracy theories and false, partisan attacks.” For weeks the President tried to ignore the film, no doubt hoping that it would go away.  Unfortunately for Obama, the film has continued to gain momentum. It has been seen by more than 2 million people, earned more than $27 million, and become the second biggest political documentary of all time.

So now he has decided to come out with guns blazing. Yet what a clumsy, ill-aimed and misleading blast this is. It begins with a quotation deploring “smear journalism.” We read that this quotation is from the “Columbia Journalism Review on "2016: Obama’s America.”  Yet the Columbia Journalism Review article was published in September 2010, nearly two years before the film came out!  It turns out that the magazine was critiquing one of my earlier books. "The Roots of Obama’s Rage."

Apparently relying on a range of left-wing discredited sources, Obama lists what it takes to be four “flat-out falsehoods.”  Let me list and address them in turn.

>> “D’Souza falsely asserted that President Obama funded $2 billion in Brazilian oil exploration.”  The Obama team claims that Obama had “nothing to do with the loan.” Well, the undisputed fact is that the Export-Import Bank awarded more than $2 billion in loans and loan guarantees to Brazil. The Export-Import Bank is a U.S. government agency and policy for the agency is set by the Obama administration. So how can the Obama administration escape responsibility for its own policies?

Moreover, we know that Obama himself approves of the policy. In 2011, Obama went to Brazil, a country where, as he put it, “the legacy of colonialism is still fresh.” There, on March 19, 2011, he reminded the Brazilians of American support for Brazilian oil exploration, and added, “We want to help with technology and support to develop these oil reserves safely, and when you’re ready to start selling, we want to be one of your best customers.”

Moreover, Obama’s Brazil subsidy is not an isolated case; the Obama administration has — again through the Export-Import Bank — awarded billions to Mexico and Colombia for oil drilling and refining in those countries.

>> D’Souza falsely charged that President Obama backed Scotland’s release of the Lockerbie bomber.” Actually this claim is not even in the film. It’s from my earlier book. And in that book I spelled out the facts. The Scottish government was considering the release of the Lockerbie bomber. That government, however, was concerned about American opposition. The Obama administration sent a secret memo to the Scottish government urging that if the bomber were released, he should be kept in Scotland, not sent back to Libya.

According to news reports, the Scottish government interpreted the memo to mean that the Obama administration didn’t strongly object to the bomber’s release, and so the man was released and sent back home to Libya.  All of this is accurately detailed, with accompanying footnotes, in my book.

>> “D’Souza even claimed that President Obama passed the bank bailouts when the facts clearly show it was President Bush who signed the Troubled Asset Relief Program.” Actually I didn’t claim that Obama did this, only that he supported the bailouts, which he did. Prior to assuming the presidency, Obama was consulted about the proposed bailouts and he publicly voiced his approval. Again, there is no reference in "2016: Obama’s America" to Obama passing any bailouts so none of this is even relevant to the film.

While I have focused here on the President’s attempt to dispute a few facts, what is most significant are the facts in the film that go undisputed. Among these are the fact that Obama’s “founding fathers” include a former Communist; a member of the Palestine National Council who has been dubbed a Professor of Terror; a Brazilian socialist who has called for other countries to “gang up” on the United States; and a domestic terrorist who, like Osama Bin Laden, tried to blow up the Pentagon.

These are Obama’s buddies, figures that he sought out, because they mirrored the Third World radicalism of his own absentee father.  This is the kind of new information in the film that is electrifying audiences, and that the President is hoping to keep Americans from finding out.

I’m not concerned about being the recipient of Obama’s rage. I’ve earned it. If he’s scared of the film "2016: Obama’s America," perhaps he has reason to be scared. So let’s debate the issues, Mr. President. But let’s stick to the facts. And be careful, sir. Your rage is showing.

Dinesh D’Souza, narrator and co-director of the film "2016: Obama's America," is also the author of the bestselling book "Obama’s America." 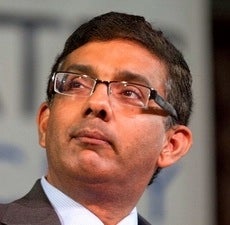