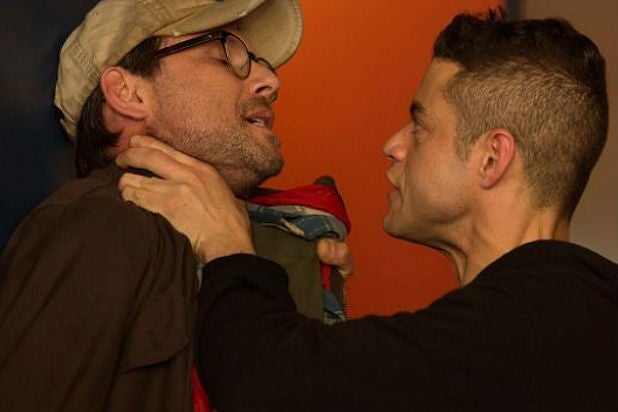 (Spoiler alert: Please do not read on if you haven’t watched Wednesday’s season finale of “Mr. Robot“)

When the final episode of the USA Network drama finally aired a week later than planned, it got a warm response from fans who praised the striking and terrifying show.

“I’m still in shock about who #MrRobot is,” wrote one fan on Twitter.

In the finale, the possibly delusional cyber-vigilante Elliot (expertly played by Rami Malek) and his hacktivist group, fsociety, finally pull off their grand plan to plunge the world into chaos — before Elliot wakes up in the car of E Corp. honcho Tyrell Wellick (Martin Wallström).

“I’m only supposed to be your prophet,” the mysterious Mr. Robot (chillingly portrayed by Christian Slater) tells Elliot as he spirals out of control. “You’re supposed to be my god.”

The scene that prompted the postponement featured an executive killing himself on live TV in front of Elliot’s childhood pal Angela Moss (Portia Doubleday), which many viewers agreed had an eerie similarity to Vester Flanagan’s rampage on his former colleagues at Roanoke’s WDBJ.

Yup. I get why they delayed it now. #MrRobot

“The previously filmed season finale of ‘Mr. Robot‘ contains a graphic scene similar in nature to today’s tragic events in Virginia,” the network said in a statement following the Aug. 26 shooting that killed Alison Parker and Adam Ward.

“Out of respect to the victims, their families and colleagues, and our viewers, we are postponing tonight’s episode. Our thoughts go out to all those affected during this difficult time.”

However, the character that really struck fear into the hearts of fans was Stephanie Corneliussen’s Joanna Wellick, Tyrell’s scheming wife.

“That woman scares the daylights out of me. Legitimately the scariest woman on TV right now. #MrRobot,” wrote one Twitter user.

Read more tweets about the finale below.

#MrRobot thank you for this show. Very, very awesome 1st season (maybe best 1st of all time). Finale was great as well. Kudos!

Mr. Kubrick must be pleased with #MrRobot. Obvious references to some of his works. Plot twists are constant but none outrageous.

Okay, #MrRobot, the wait for Season 2 is going to be painful. PAINFUL. Need more now.

Words can't really do this show justice. Simply great will have to do #MrRobot

Holy crap they have arcade games called "Intergalactic Planetary" and "Dark Seoul" could this show get any better. #MrRobot

Somebody give the sound designers ALL the Emmy's please. #MrRobot #DatBot

The next time there's an fsociety protest in Times Square, I want in. And a mask. #MrRobot