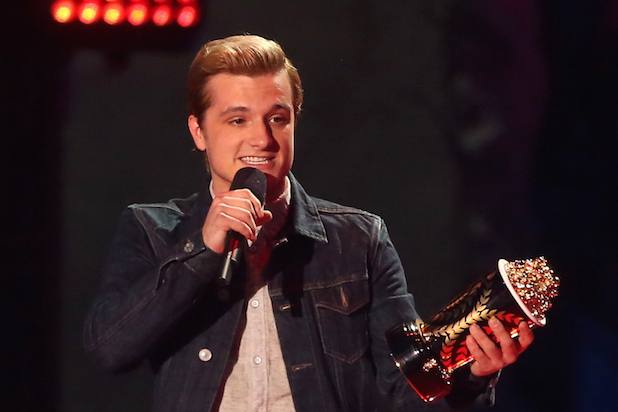 For a night, at least, “The Hunger Games: Catching Fire,” “The Hobbit: Desolation of Smaug” and “This is the End” got to be awards show darlings.

Commercial hits, particularly those geared at audiences too young to legally drive or drink, were the big winners at Sunday’s MTV Movie Awards.

Accepting the evening’s top prize, Hutcherson paused to offer a tribute to his co-star Philip Seymour Hoffman, who died of a drug overdose in February at the age of 46.

“To have him in our movies was one of the coolest things in the world,” Hutcherson said. “He’s one of the actors I’ve looked up to my entire life. We think about him every day on set.”

That was one of the few somber moments in a night filled with gleaming pecs, screaming tweens and oodles of product placements for upcoming movies like “The Amazing Spider-Man 2” and “The Fault in Our Stars.” Kicking things off, host Conan O’Brien strode out on a set that had been outfitted to look like the apocalypse, complete with rocks, images of burning buildings and loads of flames. It set the stage for an evening that veered, sometimes awkwardly, from the hormonal to the silly to the self-serious.

“Kids if you’re watching at home, don’t do drugs and then go into set design,” he added.

What followed was the Oscars for the pre-Millennial Generation, hence the victory of Zac Efron in the Best Shirtless Performance category and “Oz the Great and Powerful’s” Mila Kunis win in the best villain category over the likes of “12 Year a Slave’s” Michael Fassbender and “Captain Phillip’s” Barkhad Abdi.

“I grew up watching these awards…and now it’s here and I’m here and it’s like the coolest thing in the world,” Hutcherson, said while picking up his Best Male Performance award.

Also read: Watch Zac Efron Get His Shirt Torn Off at the MTV Movie Awards (Video)

It’s a show where even critically derided films such as “We’re the Millers” had a chance to pick up statues (in its case winning Best Kiss and Best Breakthrough Performance for Will Poulter) — one that also boasted loose moments, such as when Rita Ora tore off Zac Efron’s shirt after he scored a Best Shirtless Performance statue, and MTV Generation Award winner Mark Wahlberg‘s expletive laced acceptance speech. Wahlberg’s four-letter-filled oration closed somewhat improbably with a shout-out to God.

There were moments of genuine emotion too. Vin Diesel gave a heartfelt tribute to Paul Walker, who died last winter in a car accident at the age of 40, honoring his “Fast & Furious” co-star as a humanitarian and loyal friend. Also pulling at heart strings, Jared Leto gave an earnest and impassioned speech about the many victims of AIDS while picking up his Golden Popcorn for Best On-Screen Transformation.

“Never let anyone stop you from turning your dreams into reality,” Leto said.

MOVIE OF THE YEAR
The Hunger Games: Catching Fire (Lionsgate)