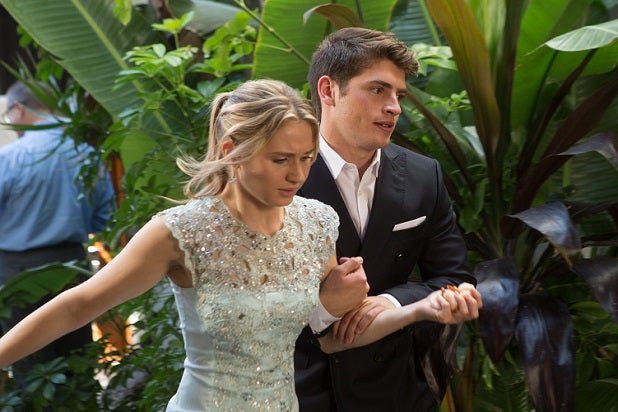 “We’re exploding our development process across screens — getting faster, more daring, putting more projects into play and taking bigger swings than ever,” said Stephen Friedman, president of MTV. “We’ve exponentially expanded the ways we connect with our audience and deliver for our advertisers.”

Live action/animated hybrid series “Greatest Party Story Ever” and weekly talk show “Girl Code Live” were also part of the presentation. Additionally, MTV renewed “Broke A$$ Game Show” for a sophomore season, as well as “Faking It” (pictured above) and “Are You The One?” for their respective third seasons.

MTV also announced that singer T-Pain, recording artist Teyana Taylor and television and Broadway performer Frankie Grande will judge its all-star season of “America’s Best Dance Crew All Stars: Road to the VMAs.” The show will be hosted by Jason Dundas (“Entertainment Tonight”).

Finally, the Viacom channel also provided advertisers with a look at the latest in its ongoing “Always On” initiative.

Below is MTV’s upcoming slate in the cable channel’s own words.

“Scream” – Tuesday, June 30 (10:00 p.m. ET/PT)
“Scream” is based on the eponymous, international hit horror franchise. After a cyber-bullying incident results in a brutal murder, the shocking violence stirs up memories of a killing spree from the past that has haunted some, intrigued others and maybe just inspired a new killer. A group of teens – with two old friends struggling to reconnect at its heart – become lovers, enemies, suspects, targets and victims of a killer who’s out for blood.

“One Bad Choice” – Thursday, July 9 (11:00 p.m. ET/PT)
Each episode of “One Bad Choice” tells the story of how a single mistake can change the trajectory of a life forever. Through first-person narrative alongside dramatic reenactments, each episode culminates with how the person is doing now.

“Todrick” – Monday, August 31 (10:00 p.m. ET/PT)
In his new weekly MTV docu-series, quadruple-threat Todrick Hall lets fans into his creative factory and introduces them to the passionate troupe of creative collaborators who pour heart and soul into his weekly videos.

“The Shannara Chronicles”
“The Shannara Chronicles” is an epic television event based on the sweeping, best-selling fantasy book series by Terry Brooks. Set thousands of years in our future, the story follows three heroes, Amberle, an Elvin Princess, Eretria, a Human Rover, and Wil, a Half-Elf, Half-Human, as they embark on a quest to stop an evil Demon army from destroying our world.

“Follow The Rules”
Follow The Rules” is a comedic half-hour docu-series centered around Grammy®-nominated rapper turned actor, Ja Rule, and the hectic household that he and his wife Aisha are trying to keep under control. The couple’s oldest daughter, Brittney, who is a college sophomore, is always pushing their boundaries. And with their two sons, Jeffery Jr. and Jordan, as well as Ja’s mother and mother-in-law living under one roof, the house that Rule built is anything but quiet.

“Middle of the Night Show”
“Middle of the Night Show” is a fast-paced reimagining of the late-night comedy talk show that brings it out of the studio and onto the streets of New York City. Each night the show’s crew and live band crash the bedroom of an unsuspecting celebrity who is forced to host a talk show on the spot without any preparation and on very little sleep. CollegeHumor’s Brian Murphy serves as the celebrity’s co-host and guide throughout the evening.

“Middle of the Night Show” is produced by Big Breakfast, the production company behind CollegeHumor Originals. Executive Producers include Sam Reich, Spencer Griffin and Jon Cohen of Big Breakfast, and Paul Ricci and Dane Reiley of MTV. Brian Murphy will also serve as a Producer.

“Greatest Party Story Ever”
This half-hour weekly show will showcase peoples’ most outrageous and epic tales covering everything from debauchery and friendship, to celebrity encounters all with a comedic tone. The funniest, craziest, most unbelievable stories will be brought to life through first-person storytelling & unique styles of animation.

New Development Deal
“The Logan Paul Show” (Working title)
Loosely scripted comedy series following Logan Paul and his real life brother at the start of his rise to fame in Ohio. We’ll get a behind-the-scenes look at the stunts and pranks that have made them the most popular performers on Vine.

“Girl Code” (Season 4) – Wednesday, June 3 (10:00 p.m. ET/PT)
This season on “Girl Code,” the hilarious cast of female personalities will continue to candidly tackle the unwritten rules of “girl code” through irreverent commentary, comedic sketches and the comical #askgirlcode anything segment.

“Girl Code” was developed and is executive produced by Ryan Ling. Darin Byrne and Paul Ricci are “Girl Code” Executive Producers for MTV. “Girl Code” is directed by Laura Murphy.

“Teen Wolf” (Season 5A) – Special Two-Part Premiere Monday, June 29 (10:00 p.m. ET/PT) and Tuesday, June 30 (9:00 p.m. ET/PT)
On the eve of Senior Year, Scott and his friends find themselves facing the possibility of a future without each other, a next phase of their lives that might take them in different directions despite their best intentions. Little do they know that outside forces are already plotting to break the pack apart long before they ever see graduation.

“Catfish: The TV Show” (Season 4B) – Wednesday, July 8 (10:00 p.m. ET/PT)
From stolen identities and fake social media profiles, to genuine desires and personal secrets, “Catfish: The TV Show” unravels the range of deceptions and emotions that can surround relationships forged solely by technology. Strange new characters and crazy motives never seen before on the show keep hosts Nev and Max on their toes as they travel the country in search of the truth.

The winner will be crowned in the live finale episode, which will air as the lead-in to the “2015 MTV Video Music Awards” Pre-Show.

“America’s Best Dance Crew All Stars: Road to the VMAs” is executive produced by Jane Mun (“The Sing Off”), Rob Lee (Bayonne Entertainment) and Howard and Karen Schwartz (Hip Hop International). Brooke Karzen, Dan Sacks and Louise Wuare the executives overseeing the project for Warner Horizon Television (“The Bachelor,” “The Bachelorette,” “The Voice”).

“Awkward” (Season 5A) – Monday, August 31 (9:00 p.m. ET/PT)
There are only a few weeks left of high school, and Jenna and her friends are making the most of it. Everyone’s already figured out what they’re going to do next year, and there’s the sense that anything can happen. The season builds to big senior year milestones like senior pranks, prom and graduation where Jenna will have to decide once and for all: are she and Matty meant to be?

“Faking It” (Season 2B) – Monday, August 31 (9:30 p.m. ET/PT)
“Faking It” began as a romantic comedy about two best friends who love each other in slightly different ways. This season, each character struggles to figure out who they are and who they are not. When Amy’s new girlfriend pressures her to come out as a lesbian, Amy realizes that she’s still confused about her sexuality. She even sparks to a cute new guy at school who shares her sarcastic wit. But, ultimately, Amy must reconcile her complicated feelings for Karma–but will their friendship survive?

“Faking It” was created by Dana Min Goodman and Julia Wolov. The series is executive produced by Carter Covington (“10 Things I Hate About You,” “Greek” “Hart of Dixie”).

Renewed Series
“Are You The One?” (Season 3)
In the most ambitious dating experiment ever attempted, 10 single women were selected and put through an extensive matchmaking process to find 10 single guys who are their perfect match. Now all 20 are living together in Hawaii trying to figure out who is their match and if they do, they’ll split the largest cash prize in MTV history – ONE MILLION DOLLARS.

“Broke A$$ Game Show” (Season 2)
“Broke A$$ Game Show” is a half-hour comedy that hits the streets of NYC luring unsuspecting contestants to push their own personal limits for cash. By never wasting money on fancy lights, stages or expensive props, hosts David Magidoff and Derek Gaines bring the savings to the people with truly “broke ass” challenges and irreverent games, all promising cold hard cash in exchange for contestants’ dignity.

Executive Producers are Rhett Bachner and Brien Meagher. The show is produced by B-17 Entertainment (A Division of Core Media Group).

“Faking It” (Season 3A)
“Faking It” was created by Dana Min Goodman and Julia Wolov. The series is executive produced by Carter Covington (“10 Things I Hate About You,” “Greek” “Hart of Dixie”).

“The Challenge” (Season 27)
“The Challenge” takes some of MTV’s most favorite competitors, along with fresh faces from “The Real World” and “Are You The One?,” to an exotic location for a brand-new explosive format. They will battle it out to bring home a life-changing grand prize. Between the new twists and the demanding pressures of the game, it’ll take more strength than ever to succeed in this game.

Best: Amy Schumer was the perfect host -- sending up the year's biggest films with her blunt delivery, and working in a bit of her standup with some healthy plugs for her upcoming Judd Apatow comedy "Trainwreck."