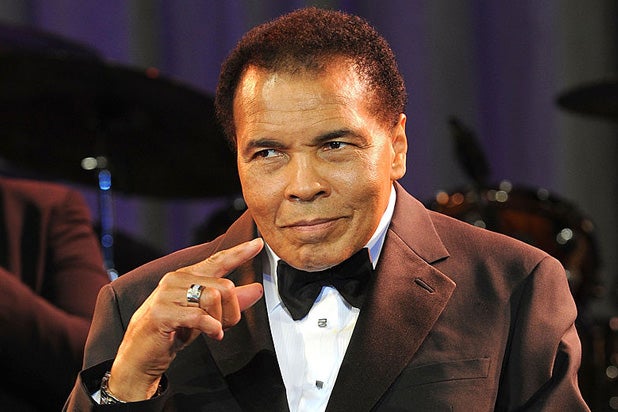 Reactions to the death of Muhammad Ali came floated in like a butterfly late Friday on social media, so swiftly it would have surely pleased the legendary boxer.

Twitter lit up with several hashtags each pushing anywhere from 500,000 to nearly a million tweets, including “#MuhammadAli,” “#CassiusClay,” “#DamnAli” and “#RIPGOAT” — the GOAT a shorthand for one of Ali’s nicknames, Greatest of All Time.

“Ali, you were generous every time I met you. Thank you for all you did for so many. Your memory will live on forever,” wrote fellow Olympian Caitlyn Jenner.

Ali contemporary George Foreman weighed in to say “A part of me slipped away.” Younger boxers expressed their grief as well, including Manny Pacquiao (“We lost a giant today”) and Oscar de la Hoya (“a legend who transcended sport and was a true champion for all”).

GOP presidential candidate tweeted his condolences: “A truly great champion and a wonderful guy. He will be missed by all!”

Some celebrities noted the political ramifications of Ali’s life and career. “Now’s a great time to preemptively remind everyone who is gonna be celebrating Muhammad Ali tomorrow to also remember that he was a Muslim,” comedian W. Kamau Bell tweeted.

The boxer died Friday at age 74 after being hospitalized in Arizona for respiratory issues, his family confirmed.

Ali also suffered from Parkinson’s disease, which was diagnosed in 1984. The family is expected to hold a funeral in Louisville, Kentucky.

Ali, you were generous every time I met you. Thank you for all you did for so many. Your memory will live on forever #Olympicgold #GOAT

Ralph Ali, Frazier & Foreman we were 1 guy. A part of me slipped away, "The greatest piece" https://t.co/xVKOc9qtub

RIP @muhammadali, a legend who transcended sport and was a true champion for all. #thegreatest #MuhammadAli pic.twitter.com/vjmXlXaHip

Manny Pacquiao releases a statement on the passing of Muhammad Ali. pic.twitter.com/hRa2kM3CLr

I met #Ali once. He was a great role model and a great man. Sending my thoughts and prayers to his family tonight.

"If my mind can conceive it & my heart can believe it—then I can achieve it." Muhammad Ali taught us all to dream. pic.twitter.com/my6Cdw2p12

And he really did.. Rest in beautiful peace #MuhammadAli ❤️ peace and love to the family. #legendforever pic.twitter.com/BmKYVlpiYe

Muhammad Ali, pacifist, Muslim. Convicted as a felon simply because he refused to go to Vietnam: "No Vietnamese ever called me n*****." -Ali

Muhammad Ali is dead at 74! A truly great champion and a wonderful guy. He will be missed by all!

Now's a great time to preemptively remind everyone who is gonna be celebrating Muhammad Ali tomorrow to also remember that he was a Muslim.

Muhammad Ali was kind , gentle funny and always a gentleman to me and my family!!

Float like a butterfly, Ali. May your wings take you to even greater heights #RIPMuhammadAli pic.twitter.com/XogZQHWNFZ

His may be the Greatest of 20th century American stories. Muhammad Ali, rest In peace 1942-2016

Thank God for Muhammad Ali. ????????????❤️❤️❤️ the greatest fighter there ever has been. All of us who fight for civil rights owe him a great debt.

i join in the chorus of those lamenting the passing of Muhammad Ali tonight. A gr8 champion & historic figure.

"I'm so fast, I can turn off the light and hop in the bed before the room gets dark." RIP Muhammad Ali #GOAT