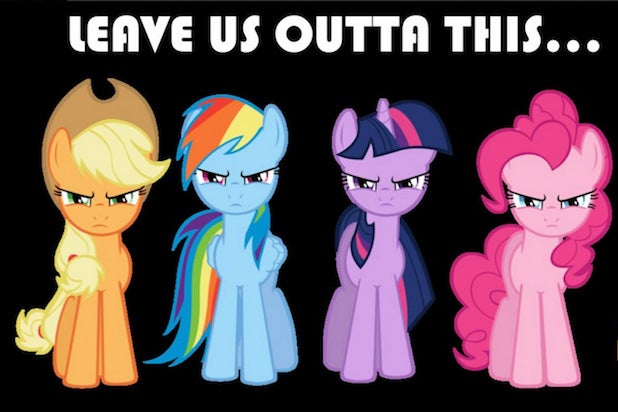 “My Little Pony” is not pleased to be used as a defense for Melania Trump’s speech plagiarizing controversy.

Republican National Convention communications director Sean Spicer specifically quoted Princess Twilight Sparkle (“This is your dream. Anything you can do in your dreams, you can do now”) as proof that parts of Melania’s speech were not plagiarized from Michelle Obama’s DNC speech in 2008 — claiming they were actually inspired by the purple female unicorn pony.

“I mean if we want to take a bunch of phrases and run them through a Google and say, ‘Hey, who else has said them,’ I can do that in five minutes,” Spicer continued, as he vehemently denied that Mrs. Trump stole from Mrs. Obama. “And that’s what this is.”

But what about Twilight Sparkle? The magical filly wasn’t too happy about being dragged into the drama, and neither were her colorful equine pals, according to Twitter.

See the most enchanting memes below.

my little pony did not ask to be part of this narrative!!! pic.twitter.com/1Ex0PCkbC7

The limited edition @GOP My Little Pony is awful. pic.twitter.com/Viz9b9TlpL

>TFW a My Little Pony character would have been a more sane nominee for the Democrat seat pic.twitter.com/i74CXvCmbu

Dear RNC,
Since you ♥ lines from My Little Pony so much, nominating Donald Trump is: pic.twitter.com/ZXZMzKHRqn

Wackiest Trump Swag Seen at the RNC, From Socks to Cereal (Photos)