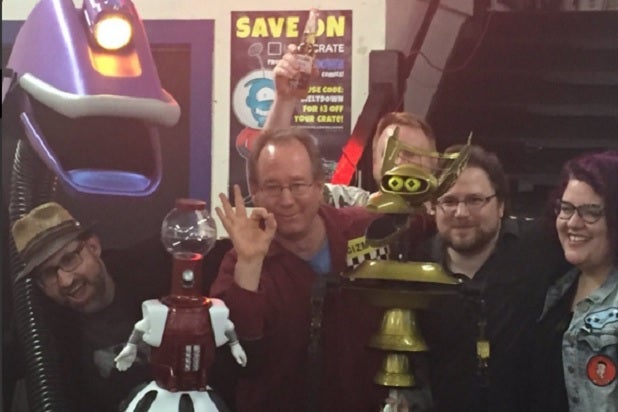 The Kickstarter-funded reboot of “Mystery Science Theater 3000” closed with a bang Friday night, setting a new record for a crowdfunded online video project.

Series creator Joel Hodgson led the final push to raise the money to create a new 12-episode season of the show with a live online telethon held at Meltdown Comics in Los Angeles.

Despite a host of technical issues (which one Twitter user compared to the Chilean mine disaster), fans donated so much that Hodgson announced they will now do a 14-episode season instead, including a holiday special.

The telethon was filled with celebrity cameos and performances, including Patton Oswalt and Felicia Day, who will both appear on the new show.

The relaunch of the show has generated significant attention, with Jerry Seinfeld, Mark Hammil, and Joel McHale all agreeing to cameo on the new season. Hodgson also tweeted that he had extended invitations to Bill Hader, Neil Patrick Harris, and Jack Black to appear on the show as well.

In addition, “Mythbusters” star Adam Savage has agreed to join the show to consult on the practical effects that will be required for the new season. Dan Harmon, the creator of “Community” and co-creator of “Rick & Morty,” has agreed to serve as a guest writer on the show.

Oswalt joined the project to write and play TV’s Son of TV’s Frank, the offspring of the character TV’s Frank from the original show, as played by Frank Conniff. Day will play the daughter of Dr. Forrester, who was played by Trace Beaulieu. Other new cast members include Hampton Yount, Baron Vaughn, and Jonah Ray.

“Mystery Science Theater 3000,” which launched on a Minneapolis UHF station in 1988, featured Hodgson and later Mike Nelson and two robot sidekicks as they riffed on cheesy B-movies by providing their own hilarious commentary.

It then moved to Comedy Central and finished its run on the Sci-Fi Channel (now Syfy) in 1999 after 197 episodes. Hodgson recently acquired the rights to the show in a joint venture with Shout! Factory.