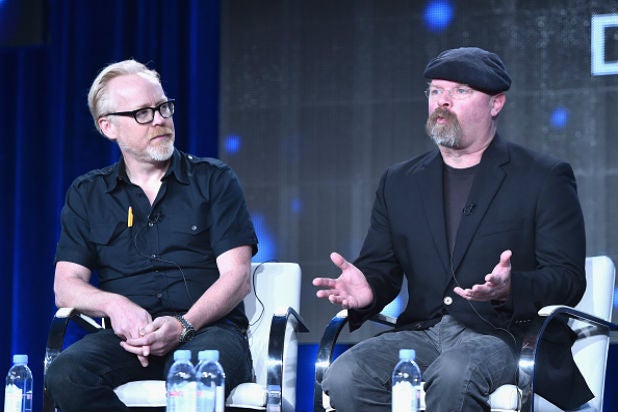 Discovery has canceled “Mythbusters” after 14 seasons, the network announced on Wednesday.

The show will be back for one final season with hosts Adam Savage and Jamie Hyneman starting January 9, 2016 on Discovery. The seven-time Emmy-nominated series premiered on Discovery in January 2003 and produced 248 episodes depicting 2,950 experiments, 1,050 myths, and 900 explosions.

“Making ‘Mythbusters’ has fundamentally and irrevocably altered the way I think as a person, as an artist, and as a scientist,” Savage said. “I’m glad for the chance to say goodbye with some of the best television we’ve ever made. I will miss making this show.”

“I never dreamed we would be on television at all, much less for such a long time and with so much praise for keeping a thought provoking show on the air. And best of all, we were able to do what we do and still have all our fingers and toes,” Hyneman said.

For the final season, Adam and Jamie will say goodbye to the show in the grandest possible fashion, according to Discovery. They’ll tackle some of the biggest myths they’ve ever tested from classic categories like: car stunts, social science, viral videos, explosions and rockets.

To top it off, fans can submit their farewell using #MythYouGuys on Facebook, Twitter and Instagram. Some of the best will be featured in the final season as the guys say their own goodbyes.

The Science Channel will also air every episode of “Mythbusters” beginning Dec. 23 at midnight, and ending on Jan. 3 at 8 p.m. ET

The marathon will air in chronological order, starting with the very first episode, “Jet Assisted Chevy,” and concluding with “Star Wars: Revenge of the Myth.”