Stars from across the music world came out to celebrate the life of R&B singer Natalie Cole on Monday at a touching memorial.

The R&B singer died on Dec. 31 at age 65 from a condition called idiopathic pulmonary arterial hypertension, which she was diagnosed with five years ago following a successful kidney transplant, her family revealed last week.

Also Read: Natalie Cole, 'This Will Be' Singer, Dead at 65

Richie, Khan and Robinson all spoke at the private service, along with Cole’s son Robert Yancy and her sisters Timolin and Casey.

“I feel so blessed to have called you my friend, and my buddy and many times my confidante,” Robinson said, according to CBS Los Angeles. “You are so real and down to Earth. Now I have to say you’re so real and up to heaven.” 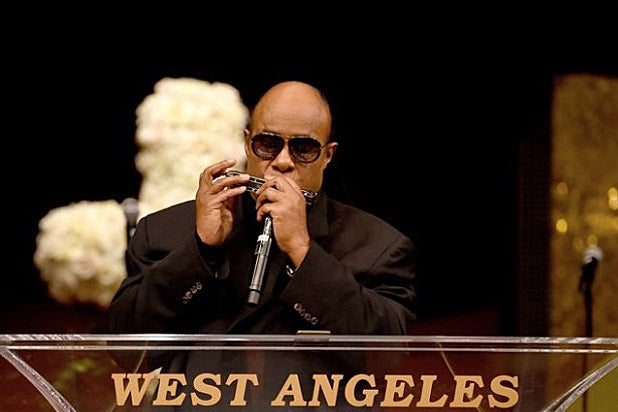 Wonder performed for the guests during the hours-long emotional event held in the 5,000-seat venue, playing the harmonica during a poignant song to honor his late friend.

After lying in a closed casket covered in white flowers during the service, Cole’s body was laid to rest next to her parents, sister and brother at Forest Lawn Memorial Park in Glendale, California.

The Grammy-winning singer was the daughter of jazz legend Nat King Cole, and is survived by Yancy, Timolin and Casey.

Cole’s greatest musical success came in 1991 with the release of “Unforgettable … With Love,” which saw her sing covers of a number of her father’s most famous songs. She won five Grammy awards that year, including Album of the Year.

Over the course of her career, Cole won nine Grammys in all, in addition to three American Music Awards, the Songwriters Hall of Fame Hitmaker Award, and two NAACP Image Awards.

Cole admitted in her 2000 autobiography to a history of drug abuse. She also suffered from Hepatitis C and a liver disease in 2008.