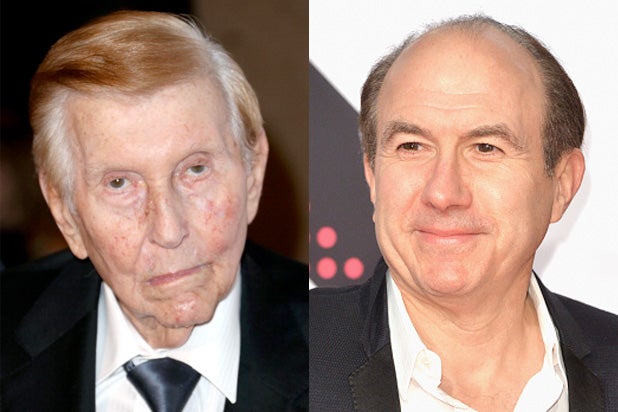 National Amusements, which has an 80-percent controlling stake in Viacom, scoffed at Dauman’s ongoing attempt to sell a minority stake in the legendary film studio.

“National Amusements has one goal for Viacom, which is to create long-term value for all of Viacom’s shareholders. Undertaking a Paramount transaction at this time would undermine rather than advance this goal,” the company said in a statement.

Deep-pocketed Wanda Group, who in January acquired Thomas Tull‘s Legendary Pictures for $3 billion, is said to be eyeing 49 percent of Paramount in the neighborhood of $4-$5 billion.

While analysts and studio insiders speculate Dauman’s motives are to pad Viacom’s stock value, it’s also been seen as exerting muscle he doesn’t have — as Dauman is engaged in a monthslong battle with Sumner and his caretaker and daughter Shari Redstone. Both Redstones have said Dauman, a longtime protege of the 93-year-old mogul, no longer has their trust.

“National Amusements has one goal for Viacom, which is to create long-term value for all of Viacom’s shareholders. Undertaking a Paramount transaction at this time would undermine rather than advance this goal,” the company said in a statement.

Paramount is one of Viacom’s most valuable assets. Any short-term benefits that might result from a Paramount transaction would be outweighed by the severe negative impact on Viacom’s future strategic flexibility to best capitalize on this important asset. The complexities of joint-ownership of Paramount would undoubtedly extend far beyond Paramount into other divisions of Viacom and limit its options to take on partners. Further, any Paramount transaction would chill the interest of parties that may be interested in a larger transaction involving all of Viacom.

Viacom’s full board, including the five new independent directors elected on June 16, should have the opportunity to carefully review any proposed Paramount transaction and determine whether it is in line with a long-term strategy for Viacom. This decision should not be made by individuals who may be leaving the board shortly. The five new independent directors bring expertise managing successful creative businesses and they should not have their strategic options limited. If the new board decides to pursue a sale of a minority stake in Paramount as part of a larger strategic plan for Viacom, we are confident that a buyer could then be identified and a sale consummated.

Viacom’s bylaws require that no sale or financial transaction affecting Paramount can occur without the unanimous approval of the Viacom board. In addition, under the terms of the Status Quo Order issued by the Chancery Court of Delaware, no Paramount transaction can occur without five prior days’ notice to National Amusements. The notice period is intended to provide National Amusements with the opportunity to oppose any such transaction. If required, we will do so.