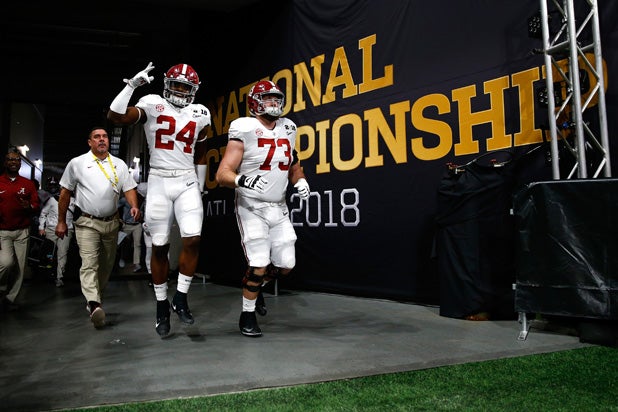 Monday night’s 2018 College Football Playoff National Championship game had all the dramatic elements of a primetime hit: a genius defending his dynasty (Nick Saban and Alabama), scrappy (Georgia) Bulldogs who hadn’t won a national championship since 1980, a heartbreaking missed field goal, a dynamic young hero, and a thrilling overtime ending.

Oh, and both President Trump and Kendrick Lamar were in the house.

While Alabama ultimately beat Georgia 26-23 at Mercedes-Benz Stadium in Atlanta, the first half of the game belonged to the underdog Bulldogs.

The gamble may have struck fear into the hearts of ‘Bama fans, but it paid off.

Hawaiian native Tagovailoa — who only had eight games of backup experience under his belt — became the Cinderella story of the season as he stood strong against a hungry Georgia defense desperate for a title.

Many Twitter users compared Georgia’s second half collapse to the Atlanta Falcons giving up a huge lead to the New England Patriots in Super Bowl LI. That’s not the first — or the last — time Saban’s Alabama has been compared to Bill Belichick’s Patriots.

Alabama’s latest victory marks the sixth national championship under Saban and the 17th title in school history, and comes a year after their loss to Clemson to close out the 2016 season.

WHAT AN ENDING! WHAT A GAME!

Someone should teach Trump the old drag queen trick of repeatedly mouthing “watermelon” when you forget the words. pic.twitter.com/mNocb0Z1sG #NationalChampionship

The city of Atlanta holds a lead like your iPhone 6 holds a charge. #NationalChampionship

Let us not forget. @JalenHurts is the first black starting QB in Alabama program history to win a #NationalChampionship. What an accomplishment. pic.twitter.com/x5Cu7Vyv16