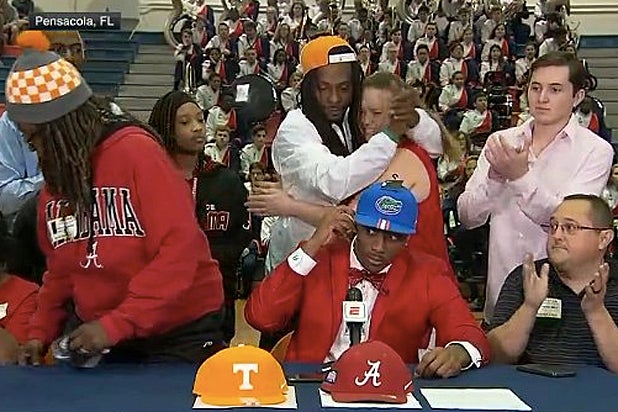 National Signing Day marks the first step in many high school football players’ journey to the NFL, but this year it also meant the breaking of one woman’s heart.

Four-star wide receiver Jacob Copeland committed to the University of Florida on Wednesday, much to the disappointment of his Alabama-faithful mother, prompting her to walk out of the ceremony as soon as he made his decision.

Momma Copeland, who had been wearing a Roll Tide sweater and a Tennessee Volunteers hat, made her exit live on national TV, leaving Jacob having to explain why she was so upset.

Fortunately, she did later return to give him a hug.

“I can’t go with my mom, I gotta go with my heart,” the football recruit from Pensacola, Florida, said.

Copeland currently ranks as one of 2018’s top 10 receiver college recruits and the No. 14 overall recruit in the state of Florida, per the 247Sports Composite.

We’re sure all will be forgiven once he’s caught a few touchdown passes for the Gators, but in the meantime, Twitter was having a field day with “one of the more awkward commitments I’ve ever witnessed.”

In one of the more awkward commitments I've ever witnessed.

Jacob Copeland is a #Gator pic.twitter.com/DM8SOgEErp

Mom walked out when No. 5 WR Jacob Copeland picked Florida over Bama and Tennessee.

But she came back to show her support. pic.twitter.com/vMrQenHjZW

That was worse than the Landon Collins situation

Many have attacked and insulted Jacob Copeland on social media for months, but I guarantee there are few people who would have had the confidence and composure to commit to a program against their family's wishes. #Gators

Man, you have to feel for Jacob Copeland. One of the nation’s top WR recruits picks Florida and his mom, in Bama gear, gets right up and walks out.

Jacob Copeland: I'll be attending the University of Florida

Mom: “I’m excited for my son Jacob Copeland to make a decision on his very bright football future.”

Copeland: “I’m going to be a Florida Gator.”

Mom: “Did I say my son? I have no son. Good luck with that decision kid, whoever you are. Bye.”pic.twitter.com/CBp5jTs1wJ