It’s been seven years since the NBA All-Star Game was held in Los Angeles, and this weekend is guaranteed to be a slam dunk with baller parties and A-list stars invading the City of Angels.

While the three-day basketball extravaganza — featuring the Celebrity Game, the ever-popular Slam Dunk competition and the All-Star itself — takes place downtown at the Staples Center, there are events going on all over town.

TheWrap will be there bringing behind-the-scenes insight from the hottest parties, most exclusive events and official NBA competitions including the Celebrity Game, Skills Challenge, Slam Dunk contest and All-Star Game.

But first, check out what is going on before Team Steph and Team LeBron take to the court (all events are in chronological order). 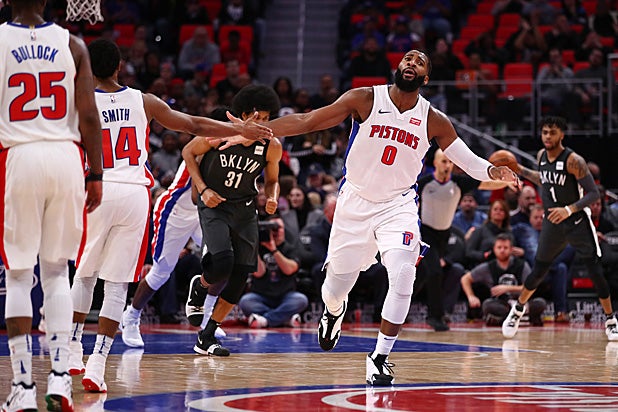 All-Star isn’t just about cool dunks or three-pointers, as proven by Detroit Pistons center Andre Drummond (above) and Johnny Stephene (a.k.a. Dribble2Much), who are co-hosting the “Let it Fly” event to raise money and awareness about the Precious Dreams Foundation. “It’s about supporting kids in foster homes to let them know that if they have a dream and vision, they can become something in the world and have an impact,” NBA skills trainer Stephene (below) told TheWrap about the non-profit founded by Nicole Russell. “A lot of them come from one-parent households or were raised by someone other than their family, like a YMCA coach. I know from experience how far it got me getting help from people weren’t my parents,” he said, having spent time in a foster home himself.

Stephene got to know Drummond from teaching ball-handling techniques first to kids and then to NBA stars such as Steph Curry and Nate Robinson. “I’ve got a kid called Kahlil Dukes on my Handle Life program. He didn’t have a lot of resources to get to college so I guided him the whole way, and now he is one of the top players at Niagara University.” 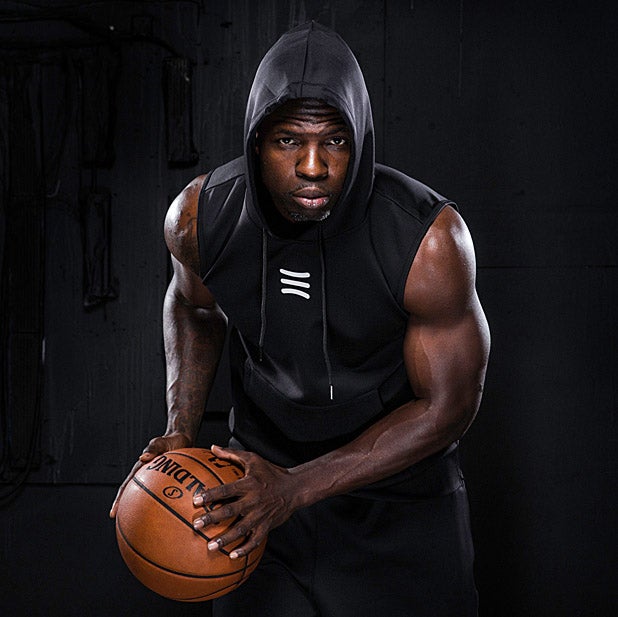 The aim of Thursday’s party, featuring tunes from DJ Whoo Kid, is to get “as many people there so we can really highlight what we are doing,” Stephene said, “The NBA All-Star is something that might not happen again in L.A. and it is only right that we do something for a good cause.”

Russell was inspired to launch Precious Dreams in 2012 by her foster sister who suffered from nightmares. “We wanted to provide activities to comfort foster kids when they were having a bad day,” she explained. “We now helping 5,000 youths across New York, L.A. and Baltimore,” and they hope to spread even more awareness this week, “especially to the players who these children who look up to and idolize,” she added.

Former L.A. Clippers player turned entrepreneur/occasional TV star Baron Davis is bringing the BIG Power Summit to Los Angeles All-Star week, tipping off with a party at the Boxwood restaurant in the London West Hollywood hotel, which is part of One Court Presented by National Basketball Players Association. The night will also feature music from DJ D-Nice (of legendary hip-hop group Boogie Down Productions).

“Making the transition from the NBA to film producer, investor and entrepreneur has had it’s share of pitfalls and lessons. I’ve learned a lot — and want that to continue, for myself, and my community. I see BIG as the perfect vehicle for that,” Davis said of the three-part event. 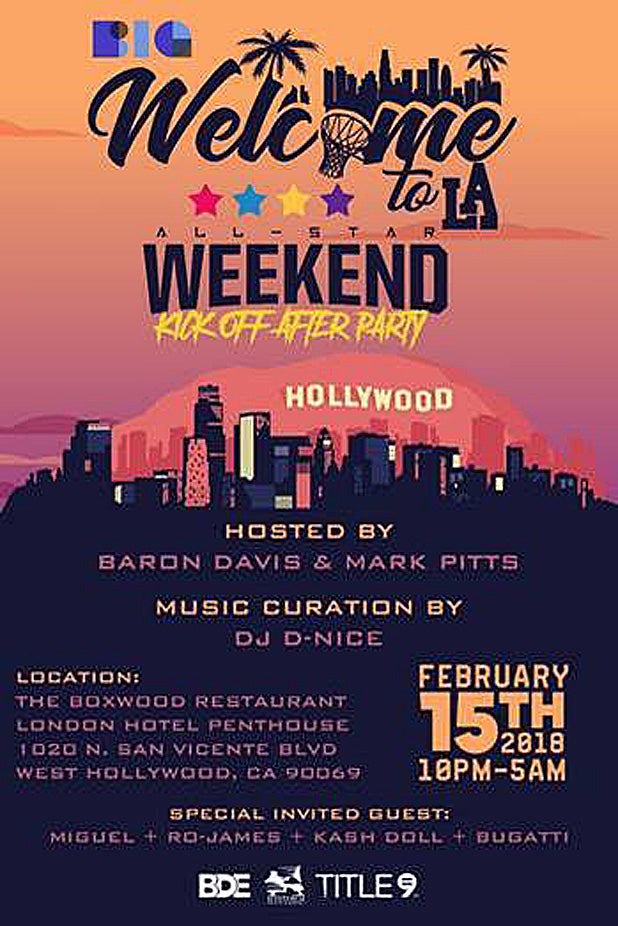 Saturday will center around a thought panel on how to create real business, social impact, collaborations and opportunities that live at the intersection of sports, media, technology and culture. Among the “thinkers” are rapper Ice Cube, NBA All-Stars Chris Paul and David Robinson, plus co-founder and president of Lyft, John Zimmer.

For all you Marvel buffs, Davis will also be hosting two private, invite-only screenings of “Black Panther” in the screening room at the London hotel on Thursday and Saturday nights.

The trifecta wraps up on Sunday, when the only place as cool as watching the All-Star game from Staples Center is watching it at the viewing party hosted by Davis and Mark Pitts, president of Urban RCA Records.

The official marketing partner of the NBA — and a damn fine liquor — is hosting the  Jack’s Daniel’s House No. 7, where guests can celebrate the spirit of Lynchburg, Tennessee, by taking a journey into a Jack Daniels barrel to learn its role in the whiskey making process at the Charcoal Mellowing tasting bar (and take a shot or two).

While the House is a ticketed, invite-only event, the Lynchburg General Store (located at 903 W. Olympic Blvd, Los Angeles) is open to the public Friday-Sunday from 11 a.m. to 6 p.m. Guests can sip whiskey, feast on southern hospitality at Miss Bobo’s Bakery and listen to tunes from Lynchburg’s house folk band. Some lucky attendees will also get to walk away in limited edition Jack Daniel’s Tennessee Honey Air Force 1 sneakers from the The Shoe Surgeon.

NBA All-Star Week Party from The Farmacy.co and Namaste Technologies 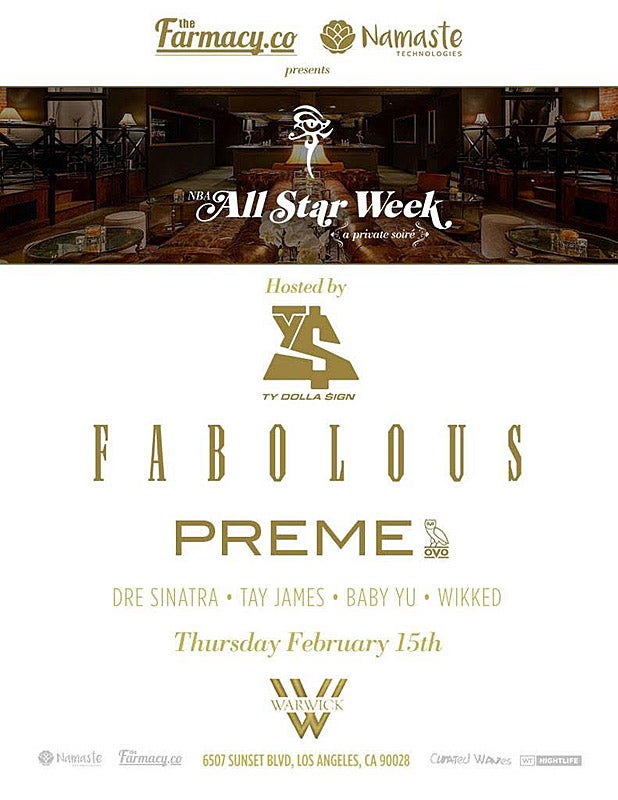 Also on Thursday, Boston Celtics great Paul Pierce is expected at Warwick Hollywood for a VIP bash presented by The Farmacy.co and Namaste Technologies. Less than a week after having his Number 34 jersey retired at the TD Garden in Boston, future Hall of Famer Pierce will be celebrating the current top NBA talent.

While the rest of the guest list is under wraps, musical entertainment is provided by Fabolous, Preme, Dre Sinatra and Wikked.

Anheuser-Busch is a longtime sponsor of the NBA so it only makes sense that Budweiser will host a two-day immersive event — featuring sports, food, fashion … and beer — to launch the brand’s new close collaboration with the league.

T-Pain, A Boogie Wit Da Hoodie and MadeinTYO are among the musical performers, as guests get cool merchandise from Levi’s and meet NBA greats. The event will also feature an art exhibition from Kickasso, fun basketball contests and fresh Budweiser on tap (of course).

The Player’s Tribune, Bleacher Report and Levi’s are all partners on Budweiser LIVE.

Former player and “Inside the NBA” analyst Kenny Smith is going Hollywood on Friday night by hosting a party at Paramount Studios, which is presented by JBL. Aside from the glow of all the star guests, a bluetooth speaker with an onboard LED light show will light up the bash. Andre Drummond and other NBA talent are expected to be taking pics at the at a GIF photo booth.

Along with airing the NBA All-Star weekend (with a little help from “Inside the NBA” analysts Ernie Johnson, Charles Barkley, Shaquille O’Neal and Kenny Smith), TNT is teaming up with AMEX for a two-night road show. Friday night sees Grammy Award-winning recording artist Kendrick Lamar (below) performing at L.A. Live’s Microsoft Square. AMEX-card members were able to buy tickets earlier this week with all proceeds going to the Big Brothers Big Sisters of Greater Los Angeles. When they pick up their tickets, fans can also go on a multi-sensory journey of basketball, with interactive rooms and instillations such as Chandelier Hoops (a room filled with 18 handmade crystal chandeliers with basketball rim bases); Neon Backboards (220 ft. of LED lighting on acrylic backboards); and Exploded Floorboards (a room is with over 1,100 individual pieces of wood). 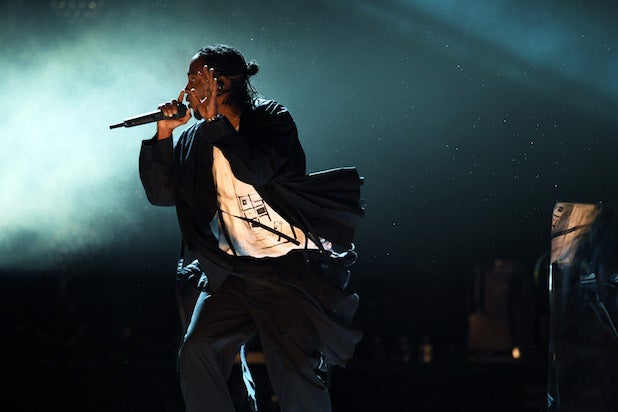 GQ magazine is taking over Saturday night with their annual NBA All-Star party, which this year will feature Cardi B headlining in downtown Los Angeles.

GQ editor-in-chief Jim Nelson invites guests to “Suit Up” for the stylish event, which is presented by Neiman Marcus and sponsored by Remy Martin.

Last year at the GQ All-Star bash in New Orleans, Russell Westbrook, Anthony Davis, Chance the Rapper, Dave Chappelle and NBA legend Dikembe Mutombo were among the VIPs partying while The Roots played a 90-minute set. “Baby Driver” Ansel Elgort and arrived with Violetta Komyshan on his arm (below), while Miles Brown of “Black-ish” showed off his hip-hop moves. 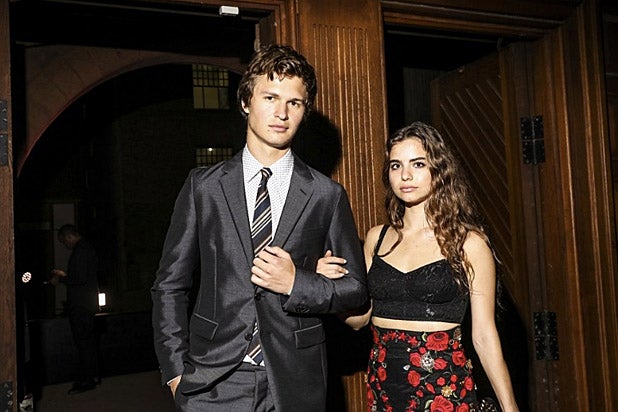 Bleacher Report NBA All-Star Sunday Beach Party
Sunday, Feb. 18; 11 a.m.-3 p.m.
Santa Monica Beach
Those who want a break from downtown can head to the beach on Sunday morning before the actual game for Bleacher Report’s first NBA All-Star party. The bash will include JBL hosting “Battle of the DJs” on the sand, with the man of the weekend — Andre Drummond — making an appearance. 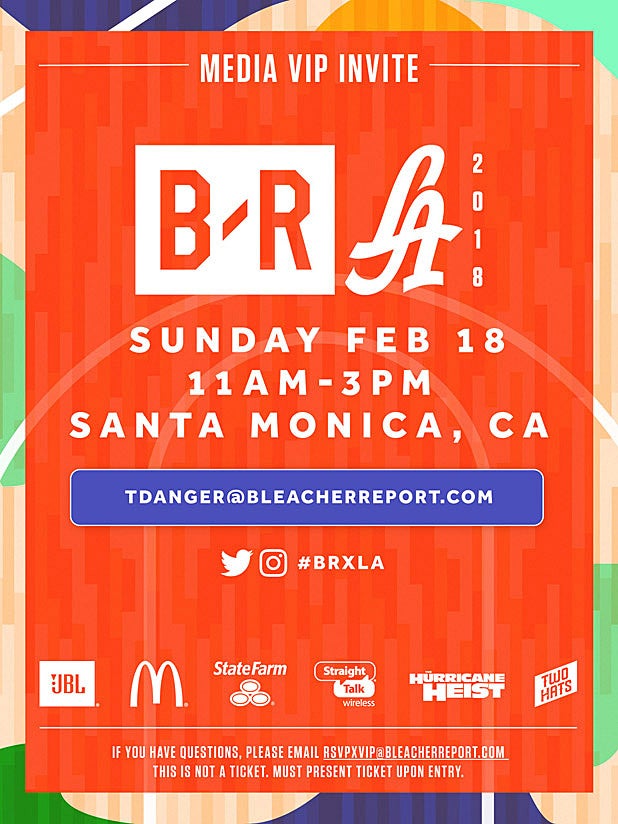 Hollywood’s coolest clubs will celebrate All-Star from Thursday to Monday as PacSun joins forces with the h.wood group. Wiz Khalifa, Lil Wayne and Famous Dex are all performing at chic supper club Poppy, while O.T. Genasis and Gucci Mane take the stage at Bootsy Bellows. 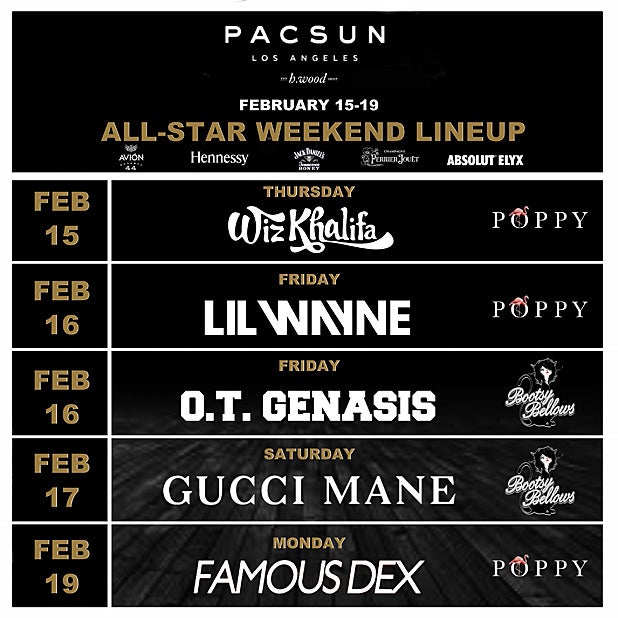 Check out all the hottest invites for the weekend of Feb. 15-18 in celebration of the NBA All-Star Game, which airs live on TNT Sunday at 8:20 p.m. ET.