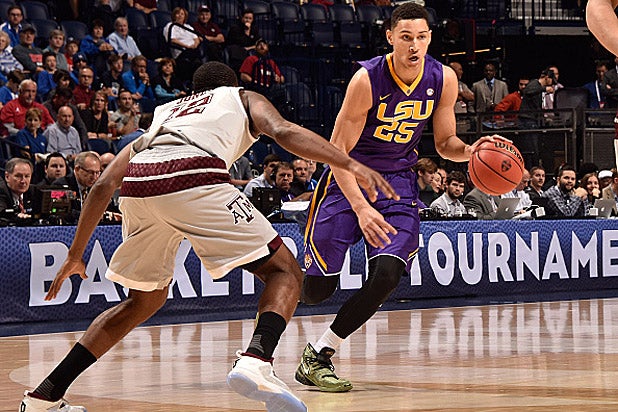 In the least surprisingly sports news of the week, the Philadelphia 76ers took Ben Simmons as the first pick in the NBA Draft on Thursday.

The forward from Louisiana State University who is originally from Melbourne, Australia, was expected to go number one at the selection airing live on ESPN from Brooklyn, New York.

The decision was read out by NBA commissioner Adam Silver.

Duke forward Brandon Ingram was taken second overall by the Los Angeles Lakers, while the Boston Celtics took Jaylen Brown from the University of California, Berkeley, with the number three pick.

Rebuilding after Kobe Bryant’s retirement, the Lakers also have the 2nd and the 32nd picks in the draft, with the Los Angeles Clippers holding the 25th and 33rd overall picks.

At 6-foot-10-inch and 240 pounds, 19-year-old Simmons had been predicted by most daft pundits to be heading to the City of Brotherly Love. The last time the 76ers had the number one pick was in 1996, when they took Allen Iverson, who went on to become an eleven-time NBA All-Star, won the All-Star game MVP award in 2001 and 2005 and was the NBA’s MVP in 2001.

“It’s kind of surreal right now,” Simmons said before the biggest night of his life, according to The New York Times. “It probably won’t hit me until I’m in the city, I’m actually part of the organization.”

The teenager from Down Under has already garnered plenty of media attention without ever having played in a professional game. He shares the same agent as current NBA Finals MVP LeBron James — Klutch Sports — and is the subject of a documentary, “One and Done,” scheduled to appear on Showtime in October.

The film explores Simmons’s journey from Australia to Florida to LSU to the NBA and illustrates the global system that delivers players to college programs in the U.S.

“I’ve learned a lot just being around LeBron,” Simmons said. “People say things about him all the time, but he would never say anything back. That’s what I learned from him: Don’t retaliate to articles or pieces or to things that are said about me.”