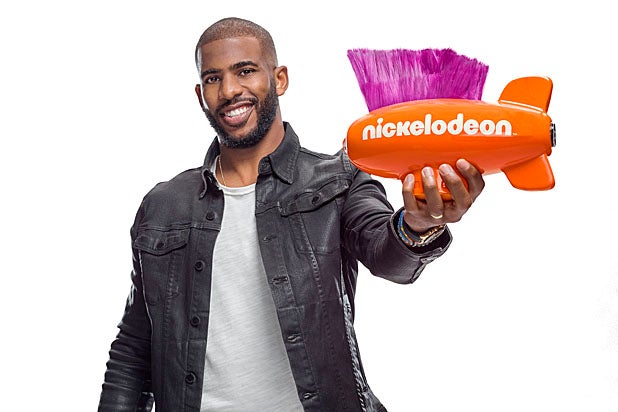 Currently setting career highs in the NBA playoffs, Houston Rockets point guard Chris Paul was named as the next host of the Nickelodeon’s “Kids’ Choice Sports” Awards on Thursday.

Paul takes over the honor from Seattle Seahawks QB Russell Wilson, who hosted the slim-filled show for the past three years.

“I am honored that Nickelodeon asked me to host this year’s ‘Kids’ Choice Sports’ Awards,” the former L.A. Clippers player said in a statement from the network. “I grew up on Nickelodeon and now love watching it with my kids, and I can’t wait to share this experience with them. I promise to bring the fun, the slime and the most epic stunts in ‘Kids’ Choice Sports history.'”

The show with tape live on Thursday, July 19, and air on Nickelodeon on Sunday, July 22 at 8 p.m.

“Kids’ Choice Sports” has slimed some of the biggest names in sports since the show’s launch in 2014, including Michael Strahan, Russell Wilson, David Beckham, Kobe Bryant, Derek Jeter and Michael Phelps.

Having previously played for the Charlotte Hornets and L.A. Clippers, Paul is going to the NBA conference finals for the first time after the Rockets eliminated the Utah Jazz on Tuesday, partly thanks to him scoring a career-playoff-high of 41 points. They now face the current champions, the Golden State Warriors, led by Steph Curry and Kevin Durant.

Nickelodeon’s “Kids’ Choice Sports 2018” is produced by Done and Dusted in association with Nickelodeon Productions. Jay Schmalholz and Shelly Sumpter Gillyard are executive producers. Constance Schwartz and Michael Strahan of SMAC Entertainment will serve as executive producers, alongside Ian Stewart and Hamish Hamilton of Done and Dusted with Hamilton also serving as director of the show.