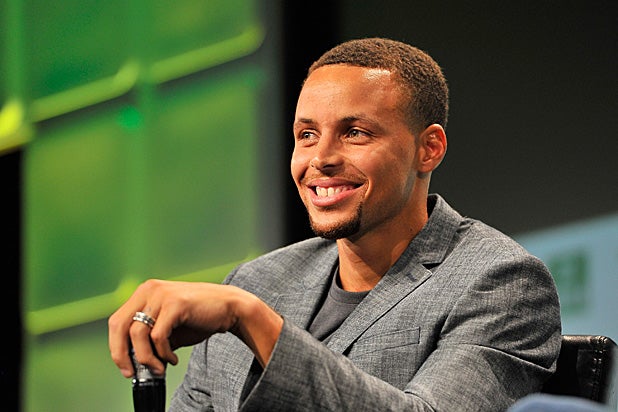 Known for his speed and accuracy on the basketball court, the two-time MVP had a quick comeback after Kevin Plank called the president an “asset” to the country.

“I agree with the description, if you remove the ‘et’ from asset,” Curry told the Mercury News.

One of the biggest names in the NBA — whose partnership with the sportswear brand includes the “Under Armour Curry” shoe collection — went on to say: “I spent all day yesterday on the phone with countless people at Under Armour, countless people in Kevin Plank’s camp, my team, trying to understand what was going on and where everybody stood on the issue.

“Based off the release that KP sent out this morning, and what he told me last night, that’s the Under Armour that I know,” he said. “That’s the brand I know he’s built and one that, as of Wednesday afternoon, is something that I’m standing on.”

Curry, who led the Warriors to the NBA Championship in 2015 and is a frontrunner for the 2017 title, was referencing comments Plank made on CNBC’s “Fast Money Halftime Report” Tuesday.

“I think he’s highly passionate. To have such a pro-business president is something that is a real asset for the country. People can really grab that opportunity,” Plank said.

The comments sparked the Twitter hashtag #BoycottUnderArmour, and prompted Under Armour to release an official statement emphasizing their commitment to diversity and respect for “different religions, races, nationalities, genders and sexual orientations.”

At Under Armour, our culture has always been about optimism, teamwork, and unity.  We have engaged with both the prior and the current administrations in advocating on business issues that we believe are in the best interests of our consumers, teammates, and shareholders. Kevin Plank was recently invited at the request of the President of the United States, to join the American Manufacturing Council as part of a distinguished group of business leaders. He joined CEOs from companies such as Dow Chemical, Dell, Ford, GE and Tesla, among others to begin an important dialogue around creating jobs in America. We believe it is important for Under Armour to be a part of that discussion.

“We have always been committed to developing innovative ways to support and invest in American jobs and manufacturing.  For years, Under Armour has had a long-term strategy for domestic manufacturing and we recently launched our first women’s collection made in our hometown of Baltimore, MD. We are incredibly proud of this important first step in the evolution of creating more jobs at home.

“We engage in policy, not politics. We believe in advocating for fair trade, an inclusive immigration policy that welcomes the best and the brightest and those seeking opportunity in the great tradition of our country, and tax reform that drives hiring to help create new jobs globally, across America and in Baltimore.

“We have teammates from different religions, races, nationalities, genders and sexual orientations; different ages, life experiences and opinions. This is the core of our company. At Under Armour, our diversity is our strength, and we will continue to advocate for policies that Protect Our House, our business, our team, and our community.