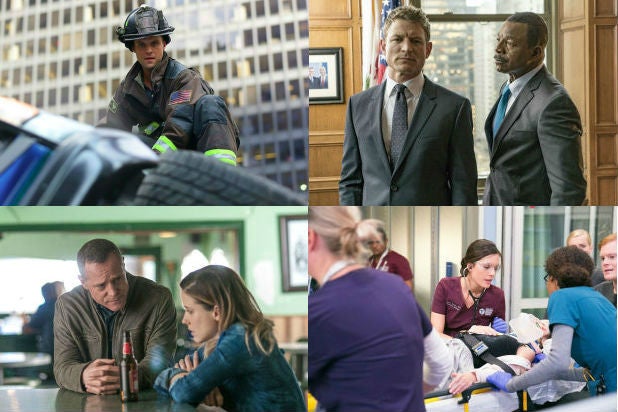 UPDATED at 1:12 p.m PT: Dick Wolf stated that, should the four-way crossover occur, it would most likely be in the Spring of 2017.

A four-way “Chicago” crossover is in the works at NBC.

NBC Entertainment president Jennifer Salke said on Tuesday at the Television Critics Association summer press tour that the network is planning to bring together “Chicago Med,” “Chicago Fire,” “Chicago PD,” and the upcoming “Chicago Justice.” Salke said it is simply a matter of scheduling.

“Justice” was ordered to series back in May, marking the fourth series set in the Windy City from “Law & Order” creator Dick Wolf.

The cast for the new show includes Philip Winchester, Carl Weathers, Nazneen Contractor, Joelle Carter and Ryan-James Hatanaka. Some of the new characters were introduced during an episode of “Chicago P.D.”

All three of Wolf’s other “Chicago” shows have been solid ratings performers for the network. The newest of the three, “Med,” was the top scripted show of its Nov. 17 premiere night, earning a 2.2 rating in the advertiser-coveted 18-49 demographic, along with 8.6 million total viewers.