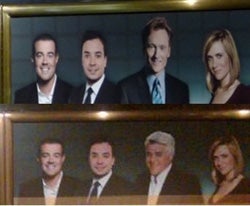 NBC isn’t waiting for Jay Leno’s official return to the “Tonight Show” to reinsert him into their corporate marketing – at Coco’s expense.

As Mediaite’s eagle-eyed editor Rachel Sklar noticed on a visit to 30 Rock on Tuesday, the Peacock network has replaced Conan O’Brien’s ginger head – which had been positioned alongside Carson Daly, Jimmy Fallon and "Saturday Night Live" stars Kristen Wiig and Seth Meyers — with Leno’s in one of its murals.

Yet, oddly enough, Leno has been downsized on the mural, too.