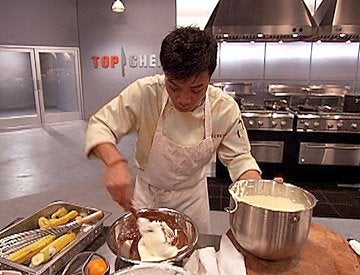 NBC is turning up the heat in the kitchen with its latest reality competition show. The peacock network announced today that it has picked up a new series, tentatively entitled "United Plates of America," that will pit contestants against each other in a competition for the opportunity to open a new restaurant chain in four cities across America.

"This is the first time the culinary and business worlds have come together in a big event series where the prize is one of the largest in reality TV history," Paul Telegdy, NBC’s executive vice president, alternative programming, said in a statement. "Not only will viewers get to watch the competition unfold, they’ll be able to eat at the winning restaurant immediately after the show’s finale."

The series was developed by  Magical Elves, who have had similarly themed successes with "Project Runway" and "Top Chef."

In place of "Top Chef"’s judge’s table stocked with celebrity chefs and food critics, these would be restaurateurs will have their fates decided by a panel of investors who will ultimately have their money tied up in the new chain.

"This show is going to make the American Dream come true for someone out there – all they need is one great idea," said Dan Cutforth, the show’s executive producer.