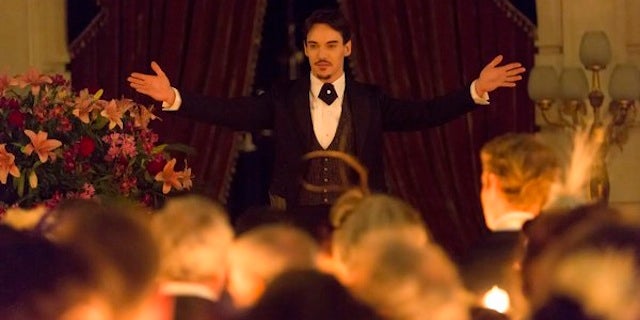 Update: During its upfront presentation to advertisers in New York City on Monday, NBC released five more trailers for its upcoming new series for the 2013-2014 season.

"Sean Saves the World" centers on Sean (Sean Hayes), a guy who must figure out how to parent his 14-year-old daughter — who just moved in — while juggling a temperamental new boss at work. Also stars Thomas Lennon, Echo Kellum, Linda Lavin, Samantha Isler. Executive produced by Victor Fresco ("Better Off Ted"), Hayes and Todd Milliner.

"The Michael J. Fox Show" follows Mike (Michael J. Fox), as he puts his career on hold to spend more time with his family and focus on his health after he was diagnosed with Parkinson’s. Five years later, with the kids growing up and Mike growing restless, it's time for him to get back to work. Also stars Wendell Pierce, Betsy Brandt, Conor Romero, Juliette Goglia, Jack Gore and Katie Finneran. Executive produced by Fox, Sam Laybourne and Will Gluck.

"Ironside" stars Blair Underwood as a New York detective who was wounded in a shooting and is now confined to a wheelchair, but still tackles tough cases with his team of experts. A remake of the 1967 to 1975 NBC series starring Raymond Burr. It comes from executive producer-writer Michael Caleo (“Rescue Me,” “The Sopranos”) and executive producers Teri Weinberg (“Ugly Betty”), John Davis, John Fox, Ron West and David Semel (“Heroes”).

"Welcome to the Family" explores when cultures collide when a white family and a Latino family are bonded together by their children who fall in love followed quickly by an unplanned pregnancy. It stars Mike O'Malley, Mary McCormack, Richardo Chavira ("Desperate Housewives"), Ella Rae Peck, Aramis Knight, Justina Machado and Joey Haro. It's executive produced by Mike Sikowitz ("Rules of Engagement").

"Dracula" follows the mysterious bloodsucker (Jonathan Rhys Meyers, "The Tudors") who has just arrived in London posing as an American entrepreneur who wants to bring modern science to Victorian society. But he has another motivation: He hopes to take revenge on those who cursed him with immortality. Also stars Victoria Smurfit, Thomas Kretschmann, Jessica De Gouw, Oliver Jackson-Cohen, Nonso Anozie and Katie McGrath. Daniel Knauf, Tony Krantz, Colin Callender and Gareth Neame executive produce.

NBC released a first look at its newly picked up series, "The Blacklist."

Clearly wanting to give the hour-long thriller every chance to become a hit, the network has given it the cherry spot after talent competition, "The Voice," on Mondays at 10 p.m.

The drama stars James Spader as Raymond “Red” Reddington, an ex-con who turns himself in the FBI to help catch a long-thought-dead terrorist, Ranko Zamani, under the condition that he speaks only to Elizabeth “Liz” Keen (Megan Boone, “Law & Order: Los Angeles”), an FBI profiler fresh out of Quantico.

The series' title refers to a “blacklist” of politicians, mobsters, spies and international terrorists, which Raymond will help catch with the caveat that Liz continues to work as his partner.

The series comes from writer/executive producer Jon Bokenkamp (“The Call,” “Taking Lives”) and executive producers John Eisendrath (“Alias”), John Davis (“Gulliver’s Travels,” “Predator”) and John Fox. The pilot was directed by Joe Carnahan (“The A-Team,” “The Grey”). It is a production of Sony Pictures Television and Davis Entertainment.