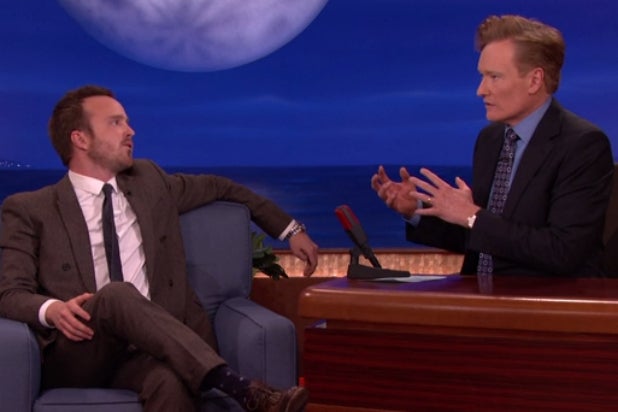 Aaron Paul did his own stunts — without any CGI — in Dreamworks’ “Need for Speed,” the star said on Wednesday’s “Conan.”

One particularly high-intensity driving scene had the actor panicking, though it really should have had director Scott Waugh scared out of his mind.

“I had to slide [the car] and get it within inches of the camera,” Paul recalled. “The first take, I get about 15 feet short.”

That wasn’t good enough for the director, who was holding the camera because the actual cameraman wanted nothing to do with the danger. “[Waugh] said, ‘If you hit me, don’t worry about it, I’ll just roll over the car,'” Paul remembered. He nailed it a few takes after that.

Later in the show, Paul admitted that his self-imposed hospitality to “Breaking Bad” fans is probably going to cause him to relocate. Word got out that Paul’s house, which is “literally a 90-second walk above Sunset [Boulevard],” was the place to score some champagne and face time with a real Hollywood star.

“It was just such a terrible idea,” Paul said. “I think I have to move.”