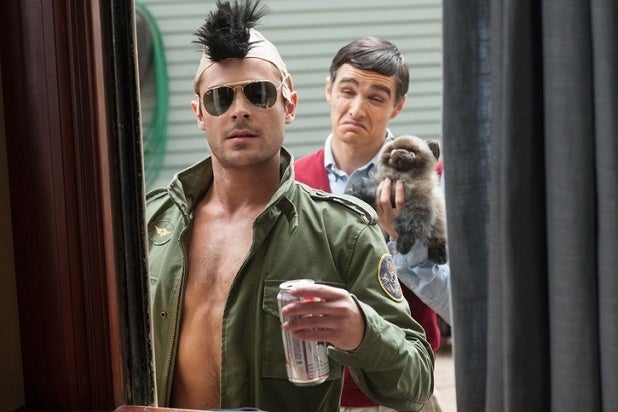 “Neighbors,” the raunchy frat boys vs. family romp starring Seth Rogen and Zac Efron, has turned what was supposed to be tight weekend box-office race into a blowout.

Universal’s R-rated comedy opened to a sizzling $19.5 million Friday and is on pace for a first weekend that could hit $50 million over the three days. That will easily top the reigning No. 1 movie, “The Amazing Spider-Man 2,” which is looking at a roughly $37 million second week after bringing in $10.1 million on Friday.

For the weekend, Sony’s Marvel superhero sequel will likely fall off a fairly steep 60 percent from its $94 million opening last week. That’s more than the 57 percent that “Captain America: The Winter Soldier” dropped in April, but less than 64 percent drop that last summer’s “Man of Steel” tumbled in its second week. While it will lose the top spot domestically after just a week, Spidey will be near $150 million in the U.S. by Sunday and has grossed $450 million globally already.

But the Nick Stoller-directed “Neighbors” is stealing the show this weekend. It blasted past the expectations of analysts who projected it would finish just over $40 million and is on track for one of the best openings for an original R-rated comedy ever.

The demographic breakdown isn’t available yet, but the numbers indicate that the well-reviewed comedy (73 percent fresh on Rotten Tomatoes) played to a date crowd rather than just young males, which most attribute to the presence of Efron and co-star Rose Bryne. First-night audiences gave it a “B.” The Friday grosses included $2.56 million from Thursday shows.

“Neighbors” will be the fourth original movie from Universal to open at No. 1 this year, after “Lone Survivor,” “Ride Along” and “Non-Stop.” The party was even extending to overseas, where “Bad Neighbours” – its title in some foreign markets – posted No. 1 openings in the U.K. and Australia. It’s at $10.4 million in the U.K and $4.3 million Down Under after a week of previews.

The other two films that opened wide Friday weren’t a factor. The animated musical “Legends of Oz: Dorothy’s Returns” couldn’t top “Rio 2” and is looking at $4 million for the three days. The Christian-angled comedy “Moms’ Night Out” was on just 1,044 screens and will be in that same range.

“The Legend of Oz: Dorothy’s Return,” the first release from distributor Clarius Entertainment, brought in $981,00 from 2,575 locations Friday for a soft $380 per-screen average. It finished seventh, behind “Rio 2,” another animated kids musical that is in is fifth week. The good news was the “A” CinemaScore it received from first-night audiences, and it could pick up with families on Saturday and Sunday.

Sony TriStar’s “Moms’ Night Out” brought in $1.2 million for a decent $1,197 per-screen average and finished eighth. The “B+” CinemaScore it received and this weekend’s Mother’s Day holiday offer some hope that the “mom-com” could gain momentum.

Fox’s comedy “The Other Woman” finished third Friday with $2.8 million Friday and is looking at $9.6 million for its third weekend. Sony’s “Heaven Is for Real” and Disney’s “Captain America” sequel followed, and both should come in at around $6 million for the three days.

The Marvel superhero sequel’s domestic total is at $240 million after six weeks in domestic release, and has brought in $682 million worldwide.