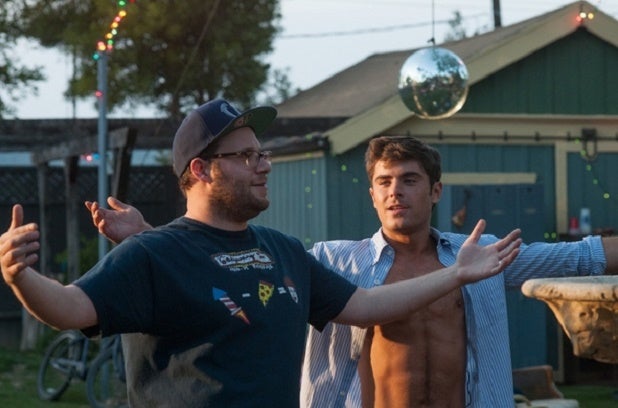 “Neighbors,” the frat boys vs. family raunchfest starring Zac Efron and Seth Rogen, partied to a very hearty $51 million in its box office opening this weekend.

Universal’s R-rated comedy knocked off “The Amazing Spider-Man 2,” which was second with $37.2 million just one week after kicking off the summer blockbuster season in the top spot with $91 million. It was expected to be a closer race, but the Nick Stoller-directed “Neighbors” blew past analysts’ expectations and turned it into a laugher.

The drop-off from last weekend for Sony’s Marvel superhero sequel was 60 percent — more than the 57 percent that “Captain America: The Winter Soldier” fell in its second week in April, but less than 64 percent drop that last summer’s “Man of Steel” tumbled. While it has given up the top spot in the U.S. after just one week, Spidey remains a juggernaut overseas, where it added nearly $70 million this weekend to raise it worldwide haul to $550 million.

The U.S. results had more to do with the surge by “Neighbors” than the slide by “Amazing Spider-Man 2.” The weekend’s other two nationwide openers, the Christian comedy “Moms Night Out” and the animated musical “Legends of Oz: Dorothy’s Return,” both came in at around $4 million.

“Neighbors” got there by playing more broadly than anticipated, with an audience that was 53 percent women. That means rather than attracting just young males, it played like a date movie, and the presence of Efron and co-star Rose Byrne had a lot to do with that.

“This picture has heart,” Universal distribution chief Nikki Rocco told TheWrap. “And I think the Rose and the family aspect, with the baby and the first house being things young couples go through, really made a difference.” The audience, which was 53 percent over the age of 25, gave it a “B” CinemaScore. It’s at 74 percent positive on review aggregation site Rotten Tomatoes.

Also read: ‘Godzilla’ Review: Or, in This Case, ‘Waiting for Godzilla’

The party even extended to overseas, where “Bad Neighbours” — its title in some foreign markets — opened at No. 1 in 17 of the 29 territories in which it debuted and brought in another $34 million.

Sony TriStar’s low-budget comedy “Moms’ Night Out” brought in $4.2 million from a not-so-wide 1,044 theaters to finish seventh. That’s an OK $4,023 per-screen average for the “mom-com” starring Patricia Heaton. The year’s latest film targeting the faith-based crowd, the $5 million “Moms’ Night Out was marketed on a grassroots level by Affirm Films and Provident Films. Moviegoers gave it a “B+” CinemaScore, much better than the critics, who had it at just 17 percent positive on Rotten Tomatoes.

“The Legend of Oz: Dorothy’s Return,” the first release from distributor Clarius Entertainment, brought in $3.7 million from 2,607 theaters for a soft $1,495 per-screen average. It featured Lea Michele as the voice of Dorothy but finished eighth, two spots below “Rio 2,” another animated kids musical that was in is fifth week. Families that did turn out liked it, and gave it an “A” CinemaScore.

The overall box office was off roughly 15 percent from last year, when “Iron Man 3” was tops with $72 million in its second week, ahead of “The Great Gatsby” with $50 million.