The Twitter accounts for Netflix and Marvel Entertainment were briefly hijacked by a hacker group that claims it just wanted to point out security flaws to the streaming service.

OurMine, which has previously targeted Facebook CEO Mark Zuckerberg, Twitter co-founder Jack Dorsey and Google CEO Sundar Pichai among others in the tech sector, is believed to have hacked the accounts, which included the @Netflix and @Avengers. The hackers posted a message that read, “Hey, it’s OurMine, Don’t worry we are just testing your security, contact us to tell you more about that.”

The hackers also included an email address at which the group can be contacted. Another hacker tweet read, “World security is s—. We are here to prove this :).”

The tweets have already been deleted, and the Netflix customer service account sent out a message shortly after the hack was discovered that read, “We’re aware of the situation and are working to get it resolved as quickly as possible.” The main Netflix account has approximately 2.5 million followers. “The Avengers” account has 2.1 million followers.

Check out screenshots of the hacked accounts below. 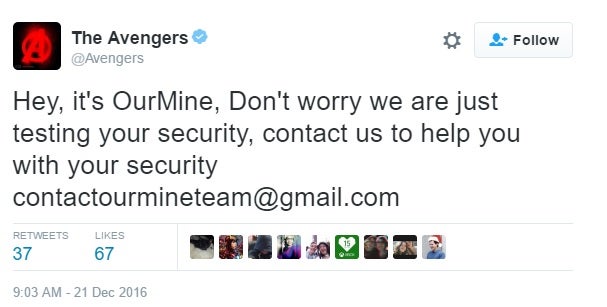