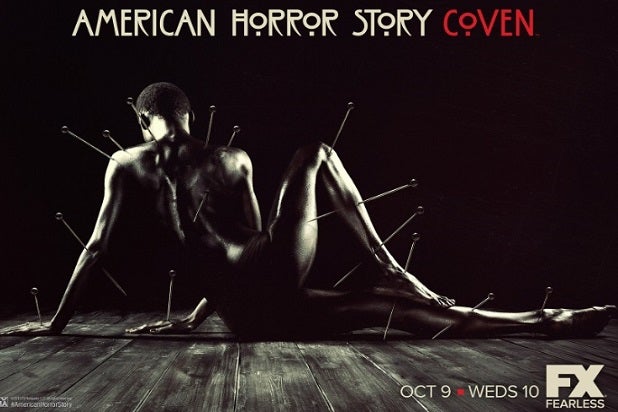 “American Horror Story: Coven” has done an exemplary job of keeping fans on pins and needles with its cryptic, creepy promos for the upoming season.

And now the latest sneak peek is putting someone else on pins and needles. Literally.

In the latest advance look at the FX goosebump-inducer, an anonymous, unclothed man is seen from behind with some very large pins plunged into his body — part crucifixion, part voodoo doll, part vivisection experiment.

And if that weren’t spine-tingling enough, an accompanying video ups the creepy factor by about 10.

Way to stick it us, “American Horror Story: Coven.”

The third iteration of Ryan Murphy and Brad Falchuk’s “American Horror Story,” which includes newcomers such as Kathy Bates, Angela Bassett and Gabourey Sidibe, is set more than 300 years after the Salem witch trials, with those who managed to escape the trials facing extinction. Mysterious attacks have been escalating against their kind, and young girls are being sent away to a special school in New Orleans to learn how to protect themselves.

“American Horror Story: Coven” premieres Oct. 9. Until then, let this keep you awake at night.