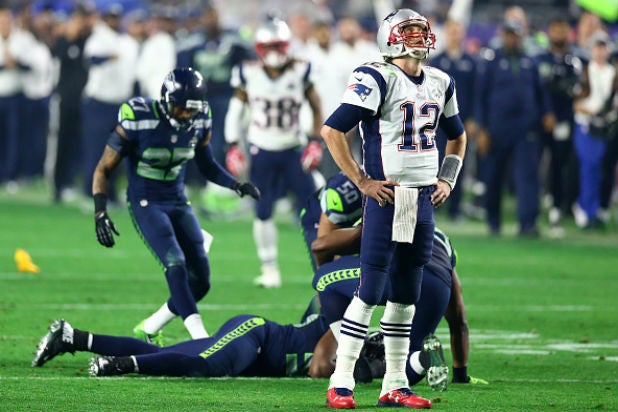 Seven diehard New England Patriots fans are taking their disgust with the NFL to federal court. They have filed a lawsuit asking a judge to reverse the league’s decision to strip the football team of a first-round pick in this month’s draft over the Deflategate allegations.

In the suit, filed Tuesday in Boston, the fans accuse the league and Commissioner Roger Goodell of fraud, negligence, intentional infliction of emotional distress and racketeering, according to the Boston Herald.

The Patriots lost their pick in the upcoming 2016 draft, plus a fourth-round pick in 2017 and were fined $1 million after a league investigation found that quarterback Tom Brady was generally aware that footballs may have been partially deflated before the 2015 AFC Championship game against the Indianapolis Colts. New England won that game in a 45-7 rout and went on to beat the Seattle Seahawks on Feb. 1, 2015, to become the Super Bowl champions.

The NFL also initially suspended Brady from playing in the first four games of last season, but the team successfully overturned the suspension following an appeal.

“This case is brought by New England Patriots fans on behalf of all Patriots fans who believe the New England Patriots professional football team were harmed by the Defendants’ arbitrary and capricious decision to revoke the Patriots first round draft choice in the April 28, 2016 NFL Draft,” the new lawsuit states, before going on to criticize the infamous 243-page Wells Report findings on Deflategate.

“In short, after a three-month, multi-million dollar investigation, actual proof of a plot to deflate footballs was never found,” it says. “In the absence of such evidence, it is difficult to understand why [Ted] Wells found such a plot ‘more probable than not.'”

The lawsuit alleges that the league violated the Racketeer Influenced and Corrupt Organizations Act, a charge typically levied against mob bosses.

The fans — who come from Massachusetts, Connecticut, New Jersey and Florida — even point blame at Patriots owner Robert Kraft, claiming he did not fight hard enough to get the draft pick back.

“Defendant Robert Kraft had remedies to attempt to get Plaintiffs’ draft pick back, but he chose his fellow billionaire owners above the Plaintiffs and fellow fans,” the lawsuit continues.

One of the plaintiffs, season-ticket holder Todd Orsatti of Bristol, Connecticut, claims his seven-year-old daughter is traumatized by the ongoing saga.

“She will no longer go to games with him because she thinks the games are fixed by the NFL after her team was punished based merely on conjecture,” the Boston Herald reports. “She is talking about finding another team, which has left Orsatti ‘devastated.'”

Brady and the team continue to deny any wrongdoing.