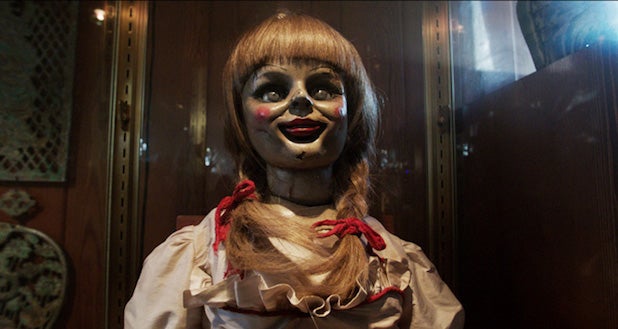 New Line is moving forward with a spinoff of “The Conjuring,” as Annabelle Wallis (“Peaky Blinders”) and Ward Horton are set to star in the low-budget horror movie “Annabelle,” TheWrap has learned.

John Leonetti, who served as the cinematographer on “The Conjuring,” is directing from a script by Gary Dauberman. Peter Safran is producing, while “The Conjuring” director James Wan is among the executive producers.

“The Conjuring” starred Patrick Wilson and Vera Farmiga as real-life paranormal investigators Ed and Lorraine Warren, who are called upon to help a Rhode Island family that is being terrorized by a haunted house. The Warrens have a room in their own house full of creepy collectibles and possessed possessions, and among them was a demonic doll named Annabelle.

New Line has a long history of horror hits between the “Nightmare on Elm Street” and “Final Destination” franchises, though none of those films matched “The Conjuring’s” impressive $318 million worldwide gross.

Also Read: How WB’s Gamble Made ‘The Conjuring’ One of Summer’s Most Profitable Movies (Video)

Wallis starred on the BBC series “Peaky Blinders” and played Jane Seymour in several episodes of Showtime’s “The Tudors.” She recently popped up in BBC America’s miniseries “Fleming,” and her feature credits include “X-Men: First Class,” “Snow White and the Huntsman” and Madonna‘s “W.E.” She’s represented by ICM Partners, Untitled Entertainment and United Agents.

Horton, who plays Dean Trayger on the soap opera “One Life to Live,” recently appeared as a broker in Martin Scorsese’s “The Wolf of Wall Street.” He’s repped by Don Buchwald & Associates and Industry Entertainment.