It turns out a popular comic book writer — who fans had been led to believe is Japanese — is actually a white American guy.

New Marvel Comics editor-in-chief C.B. Cebulski has now admitted he posed as “Akira Yoshida,” a popular Japanese manga writer. The revelation comes after years of denials from Cebulski, according to fan site Bleeding Cool, which reported Cebulski even created a phony backstory to explain Yoshida’s origins.

“I stopped writing under the pseudonym Akira Yoshida after about a year,” Cebulski told the Bleedingcool.com, which first reported the story on Tuesday. “I was young and naïve and had a lot to learn back then,” he said in a written message to the site.

A Marvel representative told TheWrap the company did not have a comment, but pointed to Cebulski’s comments to Bleeding Cool as accurate.

Despite Cebulski calling the revelation “old news that has been dealt with,” it has come as a shock to both fanboys and industry insiders.

How did "Yoshida" get paid for his comic work? https://t.co/KI61aHF90L 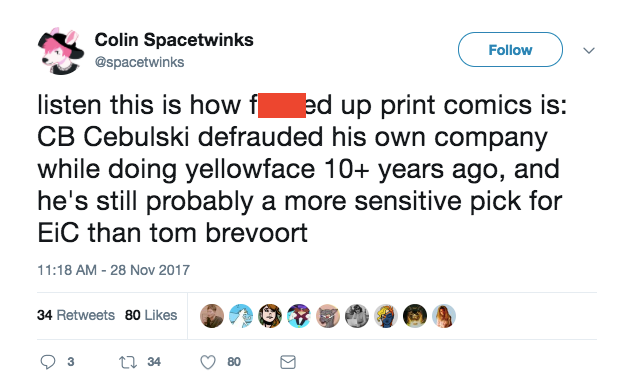 At least one Marvel employee was led to believe he had met with Yoshida face-to-face.

The mixup fooled former Marvel Executive Editor Mike Marts, who said in 2005 he’d met the famed Asian writer. Instead, he’d actually met with a Japanese translator and mistaken him for Yoshida, according to Bleeding Cool.

One issue that arose for Cebulski as he rose through the ranks at Marvel, according to Bleeding Cool, was a rule preventing editors from writing comics. He continued writing as Yoshida while at Marvel, but decided Yoshida needed to be “killed off” around 2006, the site reported Tuesday. Rich Johnson of Bleeding Cool said in his report that he had been on the scent, pressing Cebulski on him being the fake-manga writer. Cebulski eventually admitted to Marvel internally he was indeed Yoshida, and continued on at the company in a freelancer position.

Eventually Cebulski climbed his way to vice president-status at Marvel, but rumors continued to bubble up, according to the Bleeding Cool. After it was announced Cebulski would become Marvel’s EIC a few weeks ago, David Brothers of Image Comics tweeted “comic journos” needed to ask why he’d penned a bunch of “Japanese-y” stories a decade back.

Now, Cebulski has copped to his time moonlighting under the Yoshida pseudonym.