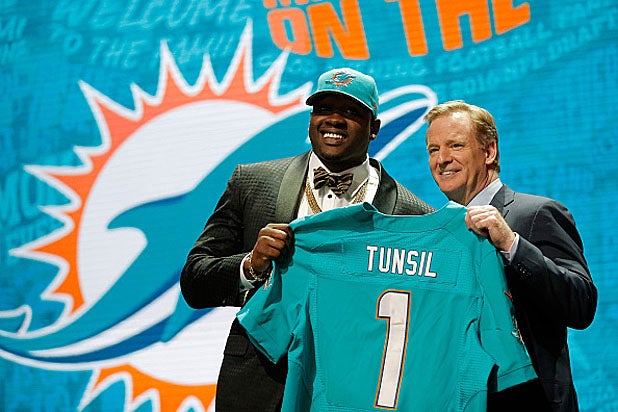 Laremy Tunsil was just moments away from becoming an NFL player when he made his first major social media fumble Thursday night.

The former Ole Miss offensive tackle posted a bizarre video of what appeared to show him wearing a gas mask and smoking out of a pipe on his official account Twitter account @KingTunsil78.

The offending post went up approximately five minutes before the start of the NFL draft at 5 p.m. PT, and the entire Twitter account was quickly deleted.

But not before some quick-fingered social media users captured the footage and it quickly went viral.

The tweet didn’t completely burn his draft value and he was picked No. 13 by the Miami Dolphins. However, some mock drafts had predicted him to go as high as third, after Jared Goff and Carson Wentz, and his free fall was widely reported by shocked draft analysts.

“Man, it was a mistake. It happened years ago,” Tunsil later told the NFL Network after finally being drafted. “Someone hacked my Twitter account.”

The 21-year-old from Lake City, Florida — who wore impressive gold-spiked shoes draft day — also said that he had passed every pre-draft drug test.

The scandal topped off a tumultuous week for Tunsil, who is currently being sued by his stepfather, Lindsey Miller.

A lawsuit filed late Tuesday at the Lafayette County Courthouse in Florida alleges that Tunsil attacked Miller last June and that Tunsil defamed Miller’s character, with the aim of “intentional infliction of emotional distress,” the Clarion Ledger reported.

“I don’t know anything about [the lawsuit],” Tunsil told reporters Wednesday morning in Chicago at a pre-draft event.

Miller and Tunsil filed domestic violence charges against each other last year. Tunsil alleged he attacked Miller after Miller attacked Tunsil’s mother, Desiree Polingo, and Miller alleged that the attack was unprovoked. Both sides dropped the charges last August.

Following the draft Twitter drama, Miller told TMZ that he had nothing to do with the gas-mask/bong pic and denied hacking his stepson’s account.

“I don’t know nothing about no video. I’m not even watching the draft,” he said.

See the video and mocking tweets below.

Whomever it is that is out to get Laremy Tunsil has succeeded. That was his spot. Let's see how far he falls.

Laremy Tunsil will be the first NFL player to be suspended right after his Goodell hug.