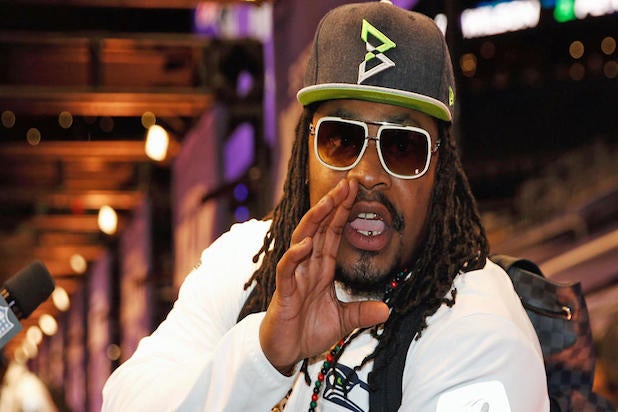 Marshawn Lynch just announced his retirement from the NFL without using a single word.

The Seattle Seahawks running back simply tweeted out a “peace” sign emoji with an image of his football cleats hanging up.

Lynch has always had an interesting relationship with both the NFL and the media, so the way he announced his retirement shouldn’t surprise anyone.

See Video: Super Bowl 50: Watch Every Movie Trailer That Debuted During the Game

Lynch managed to go out on his own terms, bypassing the media and announcing he was walking away via his own Twitter account. He also sent it during Super Bowl 50 when the nation’s attention was clearly on the NFL.

Lynch has been a quote machine, when he decides to speak, throughout his career. Lynch’s gems include “I’m just ’bout that action, boss” and “I’m here so I won’t get fined.” He notoriously offered one-word answers to reporters during postgame interviews and often answered every question with the same response, although he would switch up the response on a weekly basis.

When Lynch was drafted by the Buffalo Bills in 2007, he famously admitted he didn’t know anything about the city.

“I didn’t know what to expect, I just knew I was going to New York,” Lynch told ESPN. “I thought I was gonna be out there with Jay-Z, and then when I finally landed in Buffalo… [there was] slush on the ground. It had just finished snowing. I didn’t [know anything about snow].”

Lynch finishes his career with 9,112 rushing yards and 74 TDs on over 2,000 carries across nine seasons. He added an additional nine receiving TDs and was named to the Pro Bowl five times. He was a key member of the Super Bowl XLVIII winning Seahawks team in 2014.

The colorful Lynch is extremely popular and has appeared on “The League” and “Conan,” so his next move should be interesting.