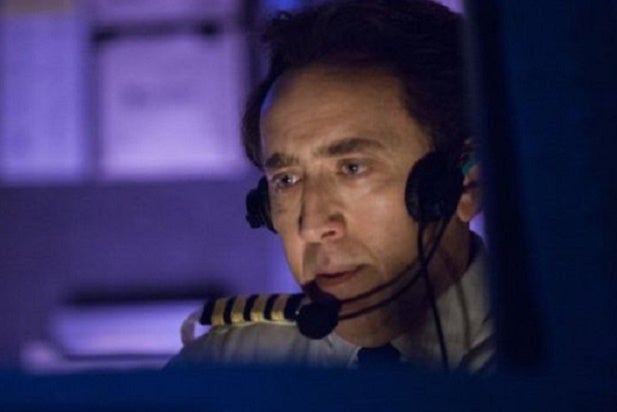 “Left Behind,” Nicolas Cage‘s Biblical Rapture thriller, captured enough of the faith-based crowd at the box office this weekend, but its hopes of attracting mainstream crowds didn’t have a prayer.

The remake of the 2001 Kirk Cameron film by the same name took in $6.8 million from 1,825 theaters. That’s a decent $3,726 per-screen average, particularly since the critics bashed “Left Behind.” Of 49 reviews on Rotten Tomatoes, just one is positive. However, the Christian-targeting Armageddon tale was overwhelmed by two other R-rated thrillers — “Gone Girl” and “Annabelle” — which brought in $38 million and $37.2 million respectively.

That makes five straight underwhelming openings for faith-based movies after an unprecedented run of success earlier this year. Mark Burnett‘s “Son of God,” the low-budget indie “God’s Not Dead” and the Greg Kinnear drama”Heaven Is for Real” all scored in the spring.

Cloud Ten Pictures is behind the $15 million “Left Behind,” which stars Cage as a pilot searching for his daughter as the world ends. It carries a PG-13 rating — unusual for a Christian movie — because of some very intense scenes. Paul Lalonde wrote and produced the thriller, which is directed by Vic Armstrong and co-stars Lea Thompson and Chad Michael Murray.

Also read: ‘Inherent Vice’ Review: Lots of Sex and Drugs, But Where Are the Believable People?

Distributor Freestyle Releasing targeted Christian groups and faith-based influencers with a grassroots marketing campaign, but also tried to sell “Left Behind” to mainstream audiences based on its merits as a thriller and the presence of Cage, a Best Actor Oscar winner for 1995’s “Leaving Las Vegas.”

But with “Gone Girl” and “Annabelle” — as well as “The Equalizer,” another R-rated thriller that took in $19 million in its second week — doing so well, there wasn’t much audience left for “Left Behind.”

Cage may also be losing his edge. The actor’s last three movies, 2010’s “The Sorcerer’s Apprentice,” 2011’s “Season of the Witch” and 2012’s “Ghost Rider: Spirit of Vengeance” have all underwhelmed, though he did voice work for last year’s animated hit “The Croods.”

The Facebook page for “Left Behind” even featured a quote from Satan: “Please do not bring unbelievers to this movie.”

At this weekend’s box office, Satan was right on the money.