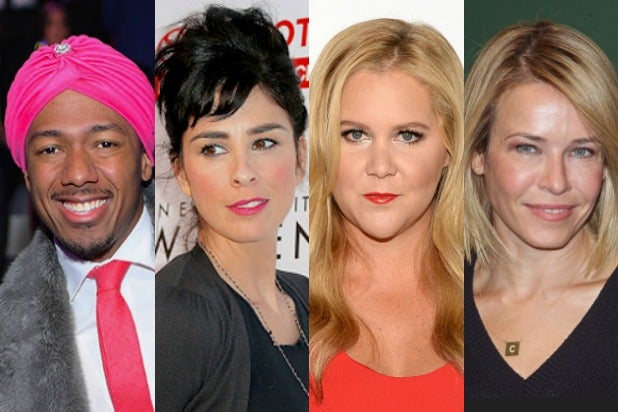 Cannon shared a 2010 tweet from Handler that included anti-gay slurs, telling his followers, “Interesting, I wonder if there was any backlash here…”

He also posted another 2010 tweet by Silverman in which she called the new “Bachelorette” a gay slur, as well as a tweet from Schumer from 2012 in which she used a homophobic term, along with the caption, “I’m just saying… should we keep going???”

When a Twitter user suggested that perhaps Cannon should “audit” his own social media feed, he responded: “Nope!! You know I’ve been saying f–ed up s–t since twitter started! I don’t play that politically correct bulls–t! F–k politics!! Only Truth!”

The posts come a day after Hart was forced to step down from hosting the upcoming 2019 Oscars following intense backlash over his own Twitter feed.

Hart drew ire after scrubbing his social media from dozens of old tweets in which he used anti-gay slurs, including one where he seemed to advocate violence against his own son should he exhibit gay tendencies.

Last year, Cannon stepped down as host of NBC’s “America’s Got Talent” after backlash over racially charged jokes about the network in his Showtime special.

And in 2014, Cannon also came under fire for posting a photo of himself wearing whiteface to promote his latest album.

“To me, this was to have fun,” he added. “Yes we have issues with race in this country, this world, but it doesn’t have to be with hatred. There’s a big difference between humor and hatred.”

After the backlash over Hart’s homophobic tweets began last week, Cannon came to Hart’s defense, commenting on Hart’s Instagram post: “We with you regardless!!! You know how we feel about people trying to control us anyway!!”

Reps for Schumer, Handler and Silverman did not immediately respond to TheWrap’s request for comment