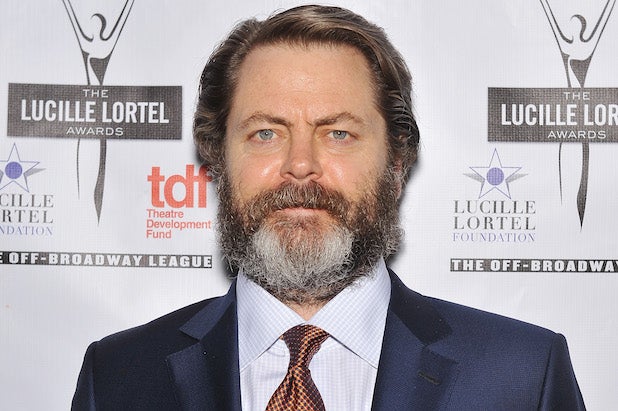 Comedians Nick Offerman (“Parks and Recreation”) and Kristen Schaal (“Flight of the Conchords”), as well as Emma Thompson, have signed on to join Robert Redford and Nick Nolte in the indie drama “A Walk in the Woods,” an individual familiar with the project told TheWrap.

Redford will play Bryson, who chronicled his attempt to walk the Appalachian Trail from Georgia to Maine with a friend (Nolte).

Also read: ‘Parks and Recreation’ Star Nick Offerman On What It Takes to Be a Man (Video)

“A Walk in the Woods” has been a passion project for Redford, who acquired the rights nearly a decade ago and courted top comedy directors Barry Levinson, Chris Columbus and Larry Charles over the years.

Offerman, who plays bacon-loving Ron Swanson on NBC’s “Parks and Recreation,” recently wrote, executive produced and starred in the concert documentary “Nick Offerman: American Ham.” He also voiced a role in “The Lego Movie” and co-starred in the progressive comedy “Date and Switch.” Offerman, who will soon be seen reprising his role as Channing Tatum and Jonah Hill’s stern boss in “22 Jump Street,” also filmed a role in Terrence Malick’s “Knight of Cups,” which remains without a release date. He’s repped by UTA and Jackoway Tyerman.