The biggest names in sports invaded Los Angeles this week for the Nickelodeon “Kids’ Choice Sports 2016” on Thursday.

And after the serious and culturally-impactful tone of the ESPYs the night before, it was all about slime-filled fun for Nickelodeon’s third-annual show.

From Russell Wilson getting down and dirty as host for the second year running to fellow NFL star Rob Gronkowski besting Wilson’s wife, Ciara, in a dance-off, there was non-stop action spilling out of UCLA’s Pauley Pavilion.

While the show airs Sunday at 8 p.m. on Nickelodeon, there was even more fun going on that you could only see with orange carpet access and a seat inside the pavilion. Fortunately, TheWrap had both.

Check out the top nine things you didn’t see on TV at Nickelodeon “Kids’ Choice Sports 2016” below. 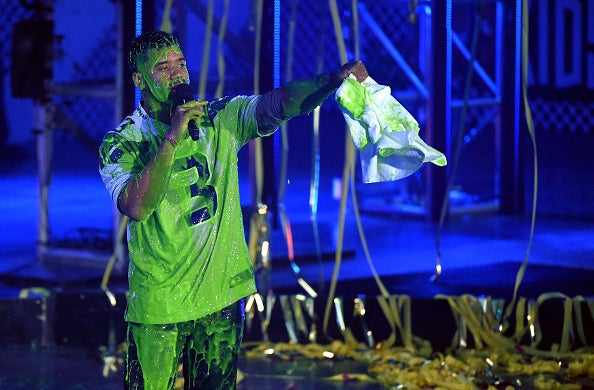 Wilson was the first one to get slimed, after proclaiming that it was “his house.” Sorry Russell, it turns out that it was King James’ palace after all as LeBron ordered the Seattle Seahawks QB be doused. The ultra professional performed a quick change, however, and was soon back out doing the running man dance at center stage — in a slime-free red sweater.

Responsible drivers
Denver Broncos linebacker Von Miller and New York Yankees pitcher C.C. Sabathia then teamed up with two kids for the KCS 500, which saw them racing tiny cars around the huge pavilion, even stopping at a crosswalk as the kids cheered them on. Miller was the victor, so while he may not have won “Dancing With the Stars,” at least he has another trophy to go with his Super Bowl ring. 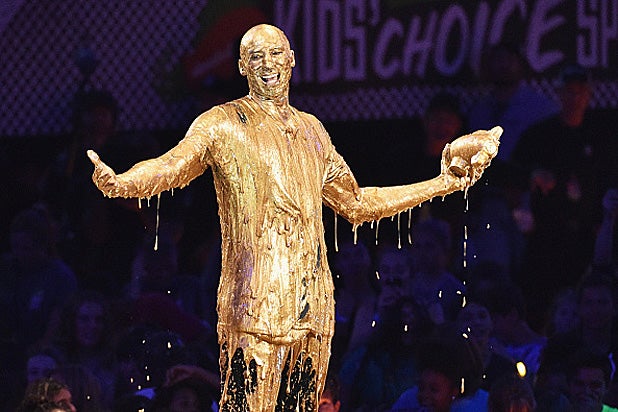 “Kids Choice Sports” is messy business. In between each skit, a whole crew of sweepers, wipers and slime removers leapt out to clean up the mess and ready the stage for the next stunt. But none caused more mayhem than Kobe Bryant getting sprayed with special gold slime after being awarded the Legend Award. Even Gronk laughed at the NBA legend when he spotted him backstage afterwards, still shimmering. Stay gold, Kobe … 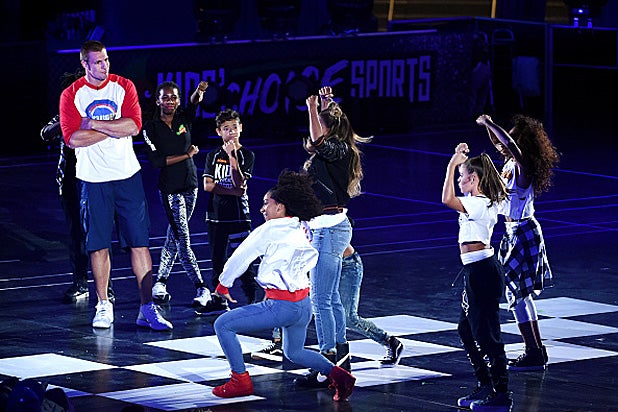 Ciara Gets Gronked
Who says you can’t beat ‘em at their own game? Gronkowski took Ciara on at her own sport — dancing — and won, thanks to his sick moves and a pint-sized Gronk crew. Even Ciara’s new husband (who was bizarrely dressed up as an old woman) voted for the party-rocking New England Patriots tight end. Still donning a grey wig and granny tights, Wilson then dared to take Gronk on himself in a 75-foot ramp challenge.

“You guys have got me in the Super Bowl, so now I’m expecting a new challenge — Smash Mountain,” he said. Just like in SB XLIX, was close, but the Pats reigned over the Seahawks as Gronkowski claimed the medal. 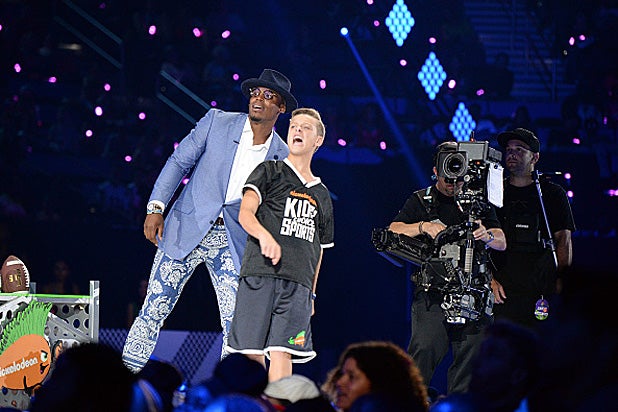 Cam Newton’s dabbing continues
The dab is not dead! While Cam Newton had promised to retire his controversial celebration dance, the Carolina Panthers QB brought it back one last time — and told the audience that “all the kids here have to dab!”

Lots of soccer fans in the house
If you needed any more proof of soccer’s exploding popularity among future generations, you just had to hear the screams of the kids when Cristiano Ronaldo and Lionel Messi’s names were called out as nominees. 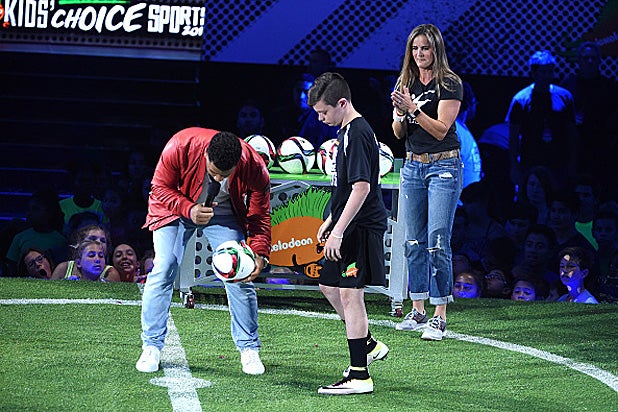 And the crowd goes wild!
The kids and parents all got behind their peers as contestants attempted half court basketball shots to win $50,000. Sadly the first hopeful, Ray, didn’t make it — prompting groans from the crowd. When another talented contestant named Oliver bombed a soccer ball into the net with the help of coach Brandi Chastain, the stadium exploded in cheers. 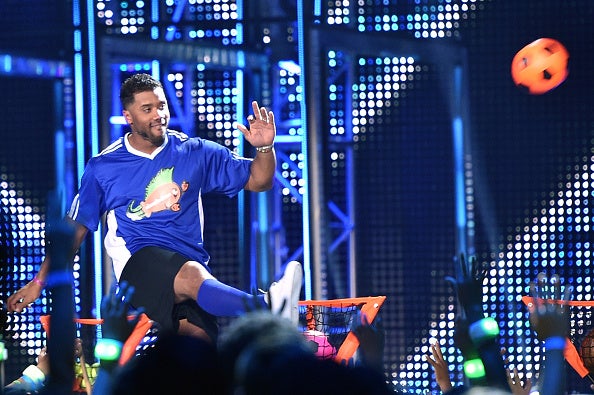 Wilson really is multitalented. After his Seahawks jersey got slimed, the QB threw on a Mariners jersey and hit some baseballs into the crowd. He then donned a soccer shirt and hammered a few into the net before then threatening to bowl into the masses. That would be silly, right? … But human bowling with skateboarding stars Tony Hawk and Jagger Eaton was perfectly normal.

Colorful crowd
Every member of the audience was given a glowing bracelet that changed colors in sync with the rest of the stadium. Plus down in the mosh pit, dancers in neon glowed under fluorescent lights to make it look like an ’80s-style dance party.

(Disclaimer: The writer of this post is friends with Rob Gronkowski and is very happy that he won an award.)

See video of Gronk reigning supreme over Wilson in Smash Mountain below.