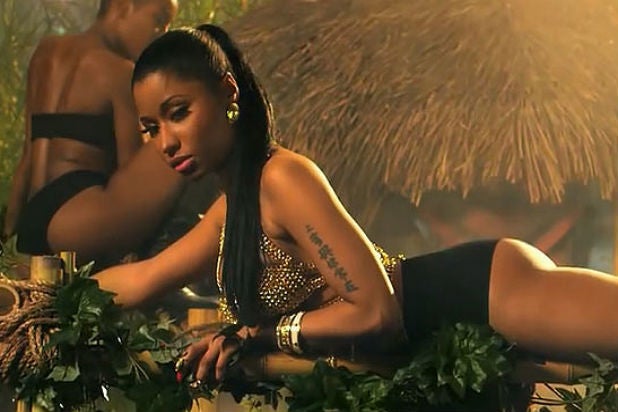 The MTV Video Music Award nominations were announced on Tuesday morning — and the cable network’s picks quickly sparked a Twitterstorm by Nicki Minaj.

When the rapper’s record-breaking “Anaconda” was passed over for Video of the Year in favor of Taylor Swift’s “Bad Blood,” Minaj suggested that it was because she wasn’t the “right” kind of artist to get the coveted nomination.

“Anaconda” logged 19.6 million views in the 24 hours following its midnight Aug. 2014 debut on Vevo. But Minaj said MTV snubbed her video because the VMAs are too mainstream and celebrate “women with very slim bodies,” while snubbing black female artists.

“When the ‘other’ girls drop a video that breaks records and impacts culture they get that nomination,” Minaj wrote during her hours-long Twitter rant.

“I’m not always confident. Just tired. Black women influence pop culture so much but are rarely rewarded for it,” she continued, when a fan praised her strength and confidence.

The “Feeling Myself” rapper went on to get embroiled in a social media feud with Swift, who assumed she was taking a direct jab at her.

“@NICKIMINAJ I’ve done nothing but love & support you. It’s unlike you to pit women against each other. Maybe one of the men took your slot,” Swift tweeted.

Even Bruno Mars later tried get a piece of the action by tweeting: “Yo I want in on this twitter Beef!! VMAs is the new WWF!! @edsheeran F–k You!”

Minaj’s steamy video for her hit song “Anaconda” celebrated her body and brash attitude as she described raunchy extracurricular activities while showing off her curves. “Anaconda” also paid homage to beautiful buttocks by sampling the world’s preeminent ode to buxom backsides, Sir Mix-a-Lot’s “Baby Got Back.”

While the rapper wasn’t nominated for Video of the Year, other artists in the running are Beyoncé for “7/11,” Ed Sheeran for “Thinking Out Loud,” Mark Ronson ft. Bruno Mars for “Uptown Funk” and Kendrick Lamar’s “Alright.”

However, Minaj is nominated for Best Female Video, Best Hip-Hop Video and Best Collaboration with Jessie J and Ariana Grande for “Bang Bang.”

See a selection of Minaj’s tweets below.

U couldn't go on social media w/o seeing ppl doing the cover art, choreo, outfits for Halloween…an impact like that & no VOTY nomination?

I'm not always confident. Just tired. Black women influence pop culture so much but are rarely rewarded for it. https://t.co/2xOvJzBXJX

Huh? U must not be reading my tweets. Didn't say a word about u. I love u just as much. But u should speak on this. @taylorswift13

Nothing I said had to do with Taylor. So what jabs? White media and their tactics. So sad. That's what they want. https://t.co/AfcwoyDvpg

Ryan posted a headline of Taylor saying she loves & supports me. But not me saying the same to her. Lol. Their headline says I took a "jab"?

I'm so glad u guys get to see how this stuff works. Taylor took her music off spotify and was applauded. We launched Tidal & were dragged.