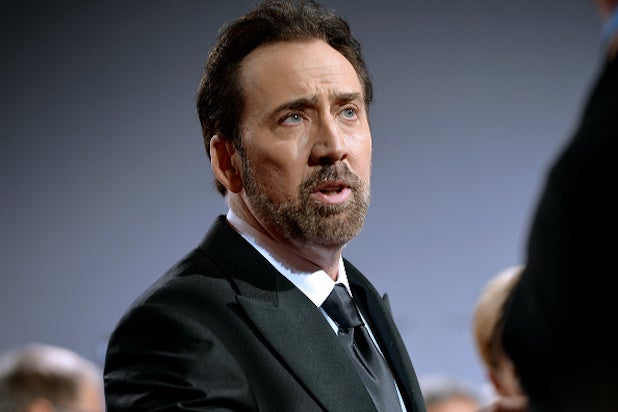 A photo of Nicolas Cage is sweeping the internet after he posed with Kazakhstan First Lady Sara Nazarbayeva Sunday. Cage was in the country’s capital city of Astana for the 13th Eurasia International Film Festival, reported the Astana Times.

In the photo, Cage is pictured wearing a traditional Kazakh hat and robe, and it has Twitter users wondering what is going on with the Oscar winner.

As one observer put it, “Nicholas Cage in Kazakhstan is the picture you didn’t know you wanted but you need.”

Others on Twitter used the photo to liken it to Russia news. “In the new ‘National Treasure’, Nicholas Cage investigates a urine stain on the back of the Constitution,” joked one user. “I kinda feel like all of America is Nicholas Cage in this photo,” said another. “How did we get here? What is all this Russia sh– everywhere? Huh?”

“Why does it feel like Nicolas Cage is about to become a part of this whole Russia scandal?” yet another user asked.

Scroll down for a national treasure trove of the funniest tweets.

In other news, Nicolas Cage is in Kazakhstan. pic.twitter.com/ceAk0ktgqy

I kinda feel like all of America is Nicholas Cage in this photo.

How did we get here? What is all this Russia shit everywhere? Huh? pic.twitter.com/gPt0fRqHE9

Nicholas Cage in Kazakhstan in our traditional attire lmao pic.twitter.com/MAAWpB8skC

I thought I'd already seen enough of #NicholasCage in #Kazakhstan but then one genius made this. #NicholasBi pic.twitter.com/1vRzHxk8t0

Nicholas Cage in Kazakhstan is the picture you didn't know you wanted but you need. pic.twitter.com/G9VNa1tdBF

In the new "National Treasure", Nicholas Cage investigates a urine stain on the back of the Constitution.

Nic Cage is in Kazakhstan doing a François Hollande in traditional garb but so far shying from a full Seagal, which involves riding a horse. pic.twitter.com/1cFUtrGRwM

Why does it feel like Nicolas Cage is about to become a part of this whole Russia scandal? pic.twitter.com/Hpfdmsd1xj

Nicolas Cage in Kazakhstan.
With new law on political service, won't be eligible for Presidency. pic.twitter.com/ZGoZ2c6vA4

Nic Cage in Kazakhstan added to the photo of "People who don't know WTH they're doing there". pic.twitter.com/eNJSlAX0Fi

Unbeknownst to all of us, Nic Cage is living in the darkest of dark timelines pic.twitter.com/5JQ3Squvzc