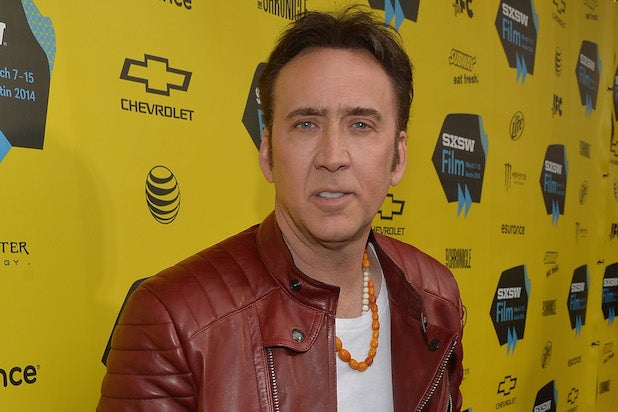 After attaching himself to star in “Vengeance: A Love Story” back in February, Oscar-winning actor Nicolas Cage has signed on to direct the indie thriller, it was announced Tuesday by Michael Mendelsohn (“I Am Wrath”) of Patriot Pictures and Union Patriot Capital Management.

John Mankiewicz (“House of Cards”) wrote the script, which is based on Joyce Carol Oates‘ award-winning 2003 novel “Rape: A Love Story.”

The story follows a single mother who is raped by four meth addicts, left for dead, and nursed back to health by her own mother. When the perpetrators make bail and are released from prison, their parents hire a renowned defense attorney who practically puts the victim on trial as he tries to shift the focus away from the overwhelming evidence of the case. The film explores the impact of that brutal act of violence on three generations of women.

Cage will play the Niagara Falls detective investigate the crime, who is forced to pursue his own brand of vigilante justice. “Vengeance” will be Cage’s second feature behind the camera, as he previously directed the 2002 indie “Sonny,” starring James Franco.

“I’m excited to work on ‘Vengeance: A Love Story’ and bring Joyce Carol Oates‘ bittersweet novel to the screen. Storytelling has always been my passion and I’m honored to work with this talented team to tell a tale of the suffering too many women have endured,” said Cage.

“I love working with Nicolas Cage. He is a scholar, gentleman, and a talented actor. Delighted to work with Nicolas again, and excited for him to sit in the director’s chair to bring this special and important project to life, ” added producer/financier Mendelsohn.

Cage and Mendelsohn have collaborated on several features, including “Lord of War,” “The Family Man,” “Wild at Heart,” “Red Rock West,” “Rage” and the upcoming “USS Indianapolis.”

Cage was represented in the deal by CAA, manager Mike Nilon and attorney Patrick Knapp.