Lil Nas X is not named in the lawsuit.

“MSCHF is currently taking orders for shoes it refers to as Satan Shoes, which are customized Nike Air Max 97 shoes that MSCHF has materially altered to prominently feature a satanic theme,” the complaint said. “This was done without Nike’s approval or authorization, and Nike is in no way connected with this project…The material alterations include at least referring to the shoe as the Satan Shoe, adding red ink and human blood to the midsole, adding red embroidered satanic- themed detailing, adding a bronze pentagram to the laces, and adding a new sock liner.” 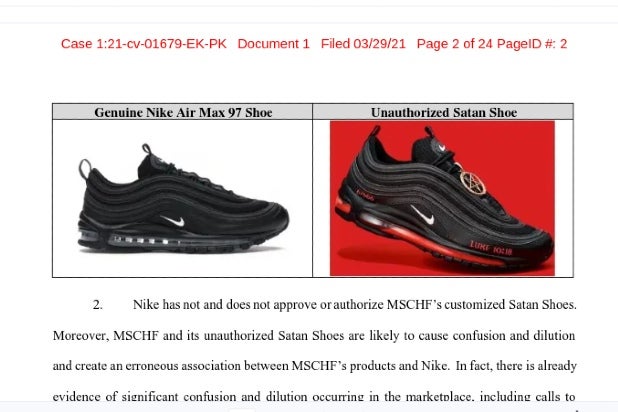 Shoe image from the complaint

“Nike has not and does not approve or authorize MSCHF’s customized Satan Shoes. Moreover, MSCHF and its unauthorized Satan Shoes are likely to cause confusion and dilution and create an erroneous association between MSCHF’s products and Nike. In fact, there is already evidence of significant confusion and dilution occurring in the marketplace, including calls to boycott Nike in response to the launch of MSCHF’s Satan Shoes based on the mistaken belief that Nike has authorized or approved this product.

“Nike files this lawsuit to maintain control of its brand, to protect its intellectual property, and to clear the confusion and dilution in the marketplace by setting the record straight– Nike has not and does not approve or authorize MSCHF’s customized Satan Shoes. As an innovative brand that strives to push the envelope and do the right thing, Nike knows it may not please everyone all of the time. But decisions about what products to put the SWOOSH on belong to Nike, not to third parties like MSCHF. Nike requests that the Court immediately and permanently stop MSCHF from fulfilling all orders for its unauthorized Satan Shoes.”

Also Read: Lil Nas X, Seth Rogen and Other Celebs Hit Back at Tucker Carlson for Disparaging Their Donations

MSCHF did not immediately respond to a request for comment on the lawsuit.

Although Lil Nas X is not named in the lawsuit he responded to the complaint on Twitter, posting a “SpongeBob Squarepants” clip of a sad character in a cardboard box on the street, panhandling with a tin cup.

“Me after the nike lawsuit… nope,” Lil Nas X wrote.