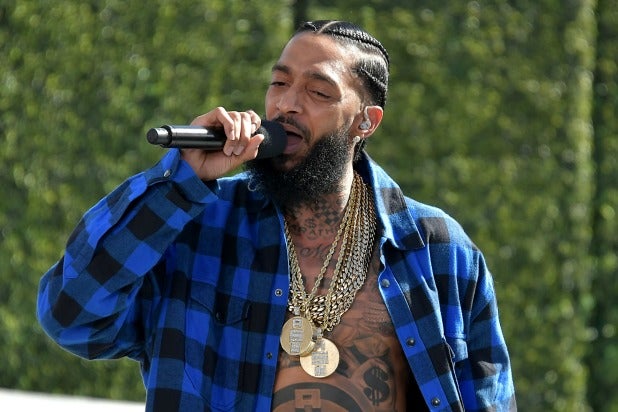 Rapper Nipsey Hussle was shot and killed Sunday outside his Marathon Clothing store in South Los Angeles, law enforcement confirmed. He was 33.

Two other men at the scene were also shot and are in serious condition. Lt. Chris Ramirez of the Los Angeles Police Department said a black male suspect was at large, according to CBS News.

Shortly before the incident Sunday afternoon, the rapper tweeted, “Having strong enemies is a blessing,” with no further explanation.

In a 2010 interview with Complex magazine, Hussle acknowledged that he was associated with one of Los Angeles’ largest street gangs, Rollin 60s Neighborhood Crips.

“It was an actual conflict over land, over the border. A generational, decades old conflict,” Hussle said of gang life. “That was more or less the culture of the young people. It was like, ‘I’mma go to war, fight, and go to the frontlines for my country.’ But it was a good experience. It put me in touch with my roots. If you don’t know your full-throttle history, the whole story of how you came to where you are, it’s kind of hard to put things together. That filled in a blank spot for me, as far as understanding myself.”

In 2009, Hussle had trouble getting his debut single “Hussle in the House” played on L.A. stations because many felt it promoted the gang culture.

“In my eyes, it’s like, ‘Nah I’m not promoting it. I’m just speaking on it.’ The radio people had to heed to that pressure and cut it off a little bit,” Hussle told Complex. “But it was a success for me. Any time I do a show, the whole crowd knows the song. Every city I go to, that’s what they know me for. So I wouldn’t trade it.”

Hussle, whose real name is Ermias Asghedom, tried his hand at acting in 2007, appearing in Bone Thugs-N-Harmony’s semi-autobiographical film “I Tried.” Three years later he starred opposite Ving Rhames in “Caged Animal” about a crime kingpin sentence to life prison. In 2015, he appeared in the pilot episode of “Crazy Ex-Girlfriend.”

He was nominated for Best Rap Album at the 61st Annual Grammy Awards in 2019 for his debut studio album “Victory Lap,” which was released in February 2018.

Hussle and actress Lauren London have a 2-year-old together. He also has a seven-year-old daughter named Emani Dior.