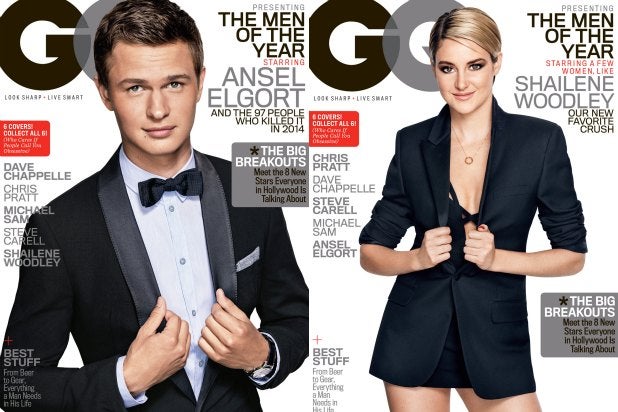 GQ is including some women on its annual Men of the Year list, including actress Shailene Woodley. She and her “Fault in Our Stars” co-star Ansel Elgort are being featured on the magazine’s cover for GQ’s December issue, which will also include covers of Chris Pratt, Dave Chappelle, Steve Carell, and Michael Sam.

Inside, Woodley discussed losing her on-screen virginity to “Whiplash” actor Miles Teller, who she co-starred with in 2013’s “The Spectacular Now,” saying he smelled, “delicious.” As for her sex scene with Elgort, she didn’t quite enjoy his pungency as much.

“On ‘Divergent,’ Ansel used to wear this really awful-smelling deodorant,” Woodley said. “I joked, ‘If you book Fault in Our Stars, just don’t wear deodorant.’ He goes, ‘Yeah, okay. Fine.’ So I wear this deodorant that I make myself, and I gave him some of that. But he just chose not to wear it–he just wore nothing the whole time.”

Elgort on the other hand told GQ that the only thing stopping him with the ladies is the constant attention he now receives from the paparazzi. The 20-year-old recalled a time a photographer followed him while out on a date with a girl.

“I get out of the car and go up to the guy and say, ‘Hey, man, how have you been? Listen, I know you have a job to do, but I’m with this girl, and we’re on this date, and we’re just trying to go to some park to hang out some more, and I don’t think we’re gonna be able to do that if you follow us,'” Elgort said. “I was basically saying, ‘Can you find it in your heart not to cockblock me?’ And you know what? He got on his scooter and turned around.”

Whether or not he was wearing deodorant that night could not be confirmed.

GQ’s Men of the Year issue is available on newsstands now in New York and Los Angeles and nationwide November 25.